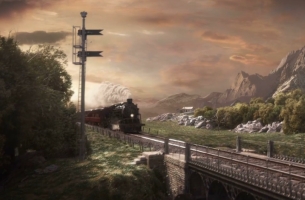 For its tricentenaire celebrated in 2015, The Martell House pays tribute to 300 years of French Art of Living through various initiatives. As part of these initiatives, La Maison reveals, in association with its partner agency TBWA\Paris, a film that celebrates 300 years of History, transmission and craft that have built the reputation of The House.

Founded in 1715 during the enlightenment era, The Martell House is the oldest of the Great Cognac Houses. Symbolic of French refinement, it is an invitation to discover cognacs of unequalled fineness, rich with a tercentenary know-how that has witnessed the greatest technological and historical evolutions.

For this occasion, The Martell House and TBWA Paris created a film that covers 300 years of History, Heritage and Know-how through an Odyssey approach.

In line with the standards of the most contemporary motion picture productions, the film is produced entirely in CGI, and tells the saga of the House from 1715 to today, combining Heritage and Great Modernity.

Using a single tracking sequence shot, the film begins with the founder on the lands of Cognac before chronologically and successively embarking from one key family figure to one House fact, accompanied by a time marker allowing an anchor in each period in History. Throughout the film, a metal route seems to tie the scenes with each other before revealing at the very end that these routes are in reality branches of a family tree retracing the House Legacy.

Created through a series of 16 photorealistic shots, the film is also a real technical challenge with nearly 2250 rendered images, over 5000 hours of rendering and no less than 1652 million polygones "in hard".

The soundtrack has been composed by Ben K – French–Danish composer of renown in the American film industry.

The voiceover, infuses to the whole film a touch of sincerity, warmth and conviviality. Values that are dear to The Martell House.

For the greatest pleasure of the senses, this work was crafted with the same level of quality as the Martell savoir-faire, and is part of the celebration of the Art of Martell for 300 years.

The film will launch all worldwide Tricentenaire celebrations and will be visible on all digital platforms of The House.