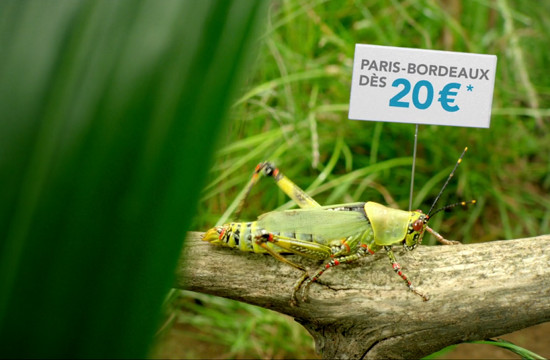 In September, SNCF via TBWA\Paris set up one of the biggest vivarium in Europe to promote the smallest TGV prices and installed it in Paris Gare de Lyon station for the occasion.

These TGV micro-prices have been staged in a microscopic word surrounded by more than 500 insects, filmed in order to produce surprising images.

Thanks to an interactive disposal – including a camera with a powerful zoom actionable with a joystick – in Gare de Lyon travelers have been able to watch ladybugs, giant stick insects, cetonids or beetles evolve around micro prices labels.

This living ecosystem was used as a base for the production of a set of a national advertising campaign formats: billboards (4x3 and bus-shelter), digital display, POS, radio ads, banners, 30 seconds film, and also a shooting of the event broadcasted on YouTube and on the social networks.

Check out the 30-second ads below.