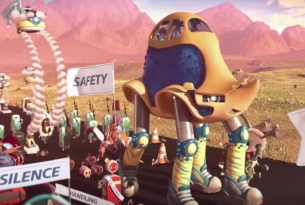 The purpose of the campaign is first, to make people understand and remember that every tire designed by Michelin brings every single type of tire performance together and second, that this development philosophy has a name: Michelin Total Performance.

By personifying every performance, united and guided by the Michelin Man, Michelin and TBWA\PARIS created Parade, an epic and spectacular journey where they demonstrate the individual and collective superiority of all these performances, faced with various weather and road conditions.

If most of the characters are originally inspired from animals linked to their performance, the octopus for its grip, or the rhinoceros for its robustness, they are also made up of elements related to the automotive world.

A lot of realism, an artistic territory specific to Michelin and a strong cinematic drive expressed both in the image as well as in the music that further uplifts the adventures of this parade.

An adventure in which the Michelin Man is at the center, unifying, leading its gathered performance crew under a single banner, the Michelin Total Performance.

Motorists change their tires on average every 2 or 3 years so the spectacular aspect of the film was a key factor to attract consumer’s attention to the importance of tires that can optimize all performance factors together.