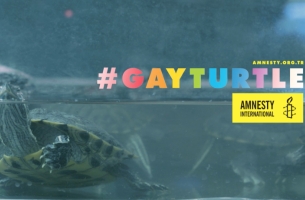 Discrimination and violence based on sexual identity continue to happen with an alarming frequency in Turkey. LGBTI individuals are exposed to discrimination in all areas of social life and become targets of hate crime and even homicide. Due to homophobia and transphobia, hundreds of people suffered from hate crimes and at least 41 have lost their lives in the last five years.

From prejudice to violence, every entrenched and unquestioned negative attitude is reason for hate crimes to reach worrying levels. Therefore, a shift in perception is necessary at the most basic level.

Amnesty International, who conducts studies about LGBTI rights in Turkey and all over the world, created the #GayTurtle campaign to illustrate the 'absurd' levels of homophobia and transphobia. The video project aims to make people face their own thoughts towards the issue, in order to break down prejudice and inclination to discriminate within the society.

8 cameras were placed in a busy aquarium shop by Amnesty International Turkey and the creative agency TBWA\ISTANBUL, who created the #GayTurtle project together. The turtle shoppers were told that their chosen turtle was gay. The reactions of people, who were in the midst of admiring the cute creature, summarize the prejudiced and negative attitude toward gays and LGBTIs in general.