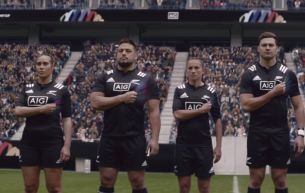 An entirely new kind of fabric - black on the surface, but when stretched, reveals the colours of the rainbow - was custom-designed, developed and created by TBWA\HAKUHODO for AIG Japan Holdings (AIG Japan), symbolising the theme of its “Diversity is Strength” campaign.
The campaign spearheads a large-scale communication campaign being undertaken by AIG Japan to declare its stance against discrimination and prejudice in any form.
The TBWA\HAKUHODO creative team was inspired by the fact that mixing all the colours of the rainbow, creates black.
A special dyeing technique was developed in which a fabric that would normally appear black, reveals the full spectrum of a rainbowʼs colours when stretched. Marking a world first, the “United Black Fabric” was born. A film was created starring players from the All Blacks, the New Zealand menʼs national rugby team, and the Black Ferns, the New Zealand womenʼs national rugby team, to carry this important message about diversity and inclusion. AIG Japan will continue to lead the charge in Japan, under the message and philosophy of “Diversity is Strength.” Using the soon-to-be-iconic “United Black T-Shirt” as its symbol, it will foster charity programs that support its cause of building a community and network of people willing to stand together to fight against the injustice of discrimination on the basis of sexual orientation, gender, physical and mental abilities, race and nationality.
Users that follow the AIG General Insurance Company, Ltd (AIG Sonpo) account on Twitter (@AIG_Sonpo) and retweet with #DiversityIsStrength will go into a draw to receive one of 200 limited edition United Black T-Shirts. The delivery is limited to Japan.
UNITED BLACK T-SHIRT
A unique ribbed structure gives the fabric great stretch and elasticity. The colours of the rainbow are printed on both sides, which essentially “dyes” the fabric in these hues. Then, black dye is printed, also on both sides of the fabric, but only on the top/outer part of every rib surface. The result is a fabric that maintains its black appearance when at rest, but when stretched, reveals the deeper grooved portions of each rib and the colours underneath.
Message from Matthew Walker (AIG Japan Holdings, Regional Chief Marketing Officer said, “Building on the success of our #TackleTheRisk film last year, we really wanted to work with TBWA\HAKUHODO and the All Blacks again to tackle the bigger social issues in Japan ‒ starting with diversity. Our creative challenge to TBWA\HAKUHODO was how do we combine AIG, the All Blacks/Black Ferns and diversity in a relevant and impactful way that reflected our common values and aspirations?"
From TBWA\HAKUHODOʼs initial organising idea of ʻIf you combine all colours of the rainbow, you get blackʼ through to their fabric innovation and film integration to achieve that promise, we knew it was a big idea.”
This movie follows the success of the online movie #TackleTheRisk” which was released in 2017 and featured the All Blacks. #TackleTheRisk has been viewed over 170 million times worldwide.
view more - Creative