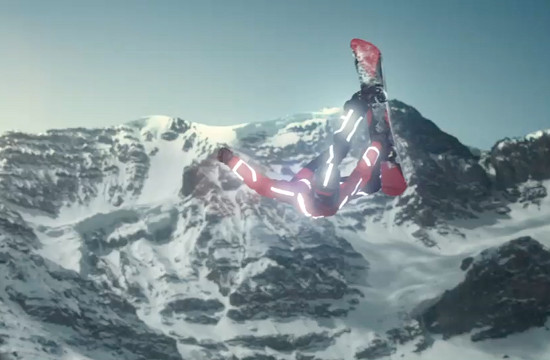 To heighten the visuals in the spot, VFX Creative Director Robert Moggach led a team of artists to craft intensified optical effects that amplify the reflective sections on both the snowboarder’s suit and the vehicle itself. He notes, “It was a really fun challenge to fine-tune the light-based effects to create a truly optical feel.”

“X-TRAIL” opens on an aerial shot of a snow-capped mountain along with the Nissan logo. We circle a red Nissan X-TRAIL perched atop the precipice as the headlights turn on and the electrified track propels the motion forward, revealing the fearless snowboarder being hauled by the SUV. The stuntman weaves through the wintry terrain with style, eventually releases the tether and flips deftly between peaks, finishing with a parachute deployment. The X-TRAIL drives on, effortlessly navigating the icy elements. The vehicle halts and we see boarders stashing their gear via a view from the SUV’s roomy cargo space. “Innovation that excites,” indeed.