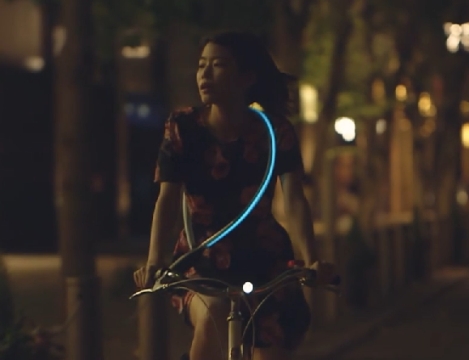 City Firefly is a bicycle chain lock system that instantly turns into wearable safety gear for cyclists. It offers improved visibility in the dark, while maintaining style and individuality.

"With the number of cyclists around the world increasing especially in urban areas, more than ever before there is a growing awareness of the necessity to enhance cyclists' safety," said Rosa Uchima, Chief Product Designer at TBWA\HAKUHODO\QUANTUM. "However, safety gear for cyclists tends to be unattractive and restricting. Inspired by fireflies, which use their flashing lights to signal and warn off danger in a beautiful way, the City Firefly was developed to make safety gear more appealing to people with style."

The City Firefly was prototyped by Uchima and fellow project manager Kazuyoshi Takeshima. QUANTUM now plans to develop the City Firefly through an open innovation method.

Uchima and Naoto Ichikawa, who produced the concept film, picked up the coveted 'Best of the Best' trophy at the Red Dot Award ceremony in Singapore last Friday, September 26.