Awards and Events 337 Add to collection 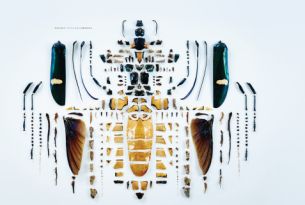 TBWA\HAKUHODO Japan won the Grand Clio Health award in the Print category for Kurashiki Central Hospital’s Surgeon Tryouts. The campaign also picked up a Gold Clio in the Design category.

Kurashiki Central Hospital, one of the largest hospitals in western Japan, teamed up with TBWA\HAKUHODO Japan to create a disruptive recruitment process (developed to identify the most skilled surgeons in the land) using sushi, origami cranes and insects. The Clio Health award recognised the recruitment posters that played a significant role in the campaign.

Top surgeons require dexterity, keen eyesight, along with nerves of steel. They also need to persevere when under tremendous stress and pressure. However, conventional medical schools in Japan focus heavily on knowledge from books, with little focus on essential hands-on surgical practice, making it difficult to differentiate between simply book-smart medical students and those with real aptitude to become world-class surgeons.

The campaign required new recruits to demonstrate their surgical potential through unique metaphorical displays of talent. Each student was required to undertake three missions:

2. Reassemble a model of a tiny insect with many complex and fragile body parts.

3. Create miniature pieces of sushi from single grains of rice.

The web movie garnered global attention, while the posters contributed to driving the local campaign. In order to recruit medical school students, the posters were displayed at recruiting events, encouraging them to participate in the tryouts. They were also posted on bulletin boards in medical schools throughout the country.

To create the posters, Origami cranes, insects and sushi, identical to those used in the tryouts, were prepared for a painstakingly detailed process, which was followed strictly – right from shooting through to the logo creation.

Yuki Tokuno, Art Director at TBWA\HAKUHODO comments: “We demonstrated thoroughness and cleanliness - which are essential values in the medical profession - depicting a beautiful yet balanced view of the world. By leveraging technology throughout, we were able to show a degree of authenticity which could not be achieved by simple photo manipulation or retouching.”