New Kimonos have been designed, inspired by the beauty of nature and its resonance with Japanese culture 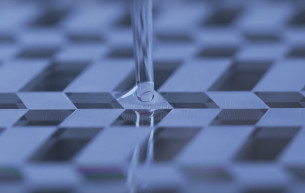 TBWA\HAKUHODO Japan was invited to create a kimono design for Takashimaya, one of the largest and most prestigious department store chains in Japan, for their special summer collection.

The team designed kimonos inspired by the beauty of nature and its resonance with Japanese culture. Since ancient times, the Japanese have always appreciated the simple sight of falling droplets of sparkling rain, with its beauty described in countless songs, poems and works of art.

A rich language has evolved around this fundamental wonder of nature, which has resulted in the Japanese vocabulary containing hundreds of words to describe the subtle but vast variety of rain.

Kirisame – rain that is so fine it spreads like a fog.

Shinotsukuame – rain that pours down strong like bamboo, piercing the ground as it falls.

Murasame – rain that stops and starts in clusters, replenishing the ground as it passes over.

The team created virtual visualizations for these three descriptive forms of rain, before using modern technology to apply them to the kimonos. The three individual designs were etched into acrylic boards using computerized lasers. Water droplets were then painstakingly applied, one by one, to the design boards, before being photographed and formed onto the kimonos.

Each water droplet shimmers with a distinct kind of light, and through these images, a never-before-seen set of patterns emerged into the world.

“Using an iconic Japanese product, the kimono, we wanted to bring the delicate sensibilities of ancient Japanese culture back to life using modern technology,” said Yuki Tokuno, Art Director at TBWA\HAKUHODO Japan. “With this project, we were able visualize and capture images that in nature are too fleeting to hold in our grasp.”