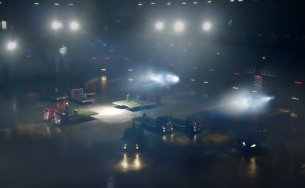 Nissan today unveils its new advertising campaign for its Light Commercial Vehicle (LCV) range. The advert, which will premiere during Saturday night’s UEFA Champions League Final, features Manchester City’s Yaya Touré captaining a team of football skills specialists in an indoor football match. However, it’s a match with a twist, as the whole match is played on the back of Nissan LCVs. The ad launches as Nissan brings its first successful year of sponsorship of the UEFA Champions League to a close.

In the ad, the pitch is made of the flatbeds of Nissan’s NT400 Cabstar. As the whistle blows to start the match, the LCVs part, breaking up the pitch into various moving segments. The players are seen leaping from vehicle to vehicle as they strive to score the winning goal with Yaya Touré, piloting one of the LCVs, celebrating when the ball hits the back of the net.

It showcases Nissan’s extensive range of LCVs, including the NT400 Cabstar and NT500 trucks, NV200 and NV400 vans, and the Navara pickup. It also includes Nissan’s electric LCV, the e-NV200 for the match referee.

Yaya Touré, midfielder for Manchester City and Nissan ambassador, commented: “It was great to be part of such an entertaining and innovative campaign. It was genuinely fun to drive the LCVs around the warehouse to make the advert. I just hope the viewers enjoy watching it just as much as I enjoyed making it.”

Gareth Dunsmore, Marketing Communications General Manager at Nissan Europe commented: “We are delighted to be marking the end of Nissan’s first year of UEFA Champions League sponsorship with the premiere of our new LCV campaign. As a company we’re about ‘innovation that excites’ – demonstrated through the introduction of our first electric van last year – and we apply that to our advertising as well as our automotive production. By using the exceptional talents of Yaya Touré and football skills specialists, we are able to showcase our wide range of pioneering LCVs in a new and exciting way on a global platform. We believe that the combination of LCVs and football will really capture the attention of small and medium-sized enterprises – our target audience for this campaign. And we’ve also potentially created a new ‘game’ too of Truckerball, so in line with Nissan’s philosophy of being an innovator. ”

The advert was made by TBWA/G1 and echoes Nissan’s philosophy of 'innovation that excites'.

Ewan Veitch, President, TBWA/G1 said “We are always excited to work with Nissan on its advertising campaigns. With its heritage for innovation, it really allows us to push the boundaries of automotive advertising. And this campaign is no different. Being able to harness Nissan’s sponsorship of the UEFA Champions League gave us real ammunition to produce an ad that is different to so many automotive campaigns you see today. It’s great to see the vision come to life and we’re looking forward to the subsequent campaigns”.