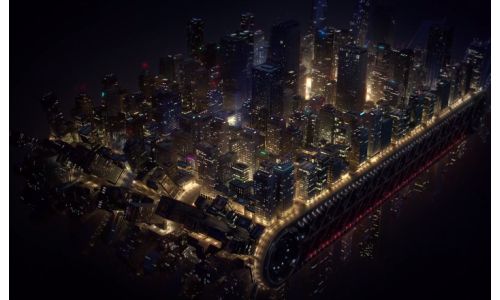 TBWA\G1 and Nissan Europe launch a pan-European campaign, “Tested to Thrill,” for the New Nissan Juke; the next chapter of the Nissan Juke is opened…

The Nissan Juke remains an emblematic model for the brand driving “Innovation that excites”.

For the first time since its launch in 2010, Nissan Juke has enhanced its design with new, energetic crossover lines and adding sporty and premium touches. Nissan has also given the opportunity for Juke owners to personalise the new model in their own way, with a range of interior and exterior colour packs available with the Nissan Design Studio. From its new headlights to the panoramic sunroof, the New Nissan Juke pushes the exhilarating ride to the limit thanks to its high performance Direct Injection turbo engines and advanced technologies such as Nissan Connect, Nissan Dynamic Control System and 4WD with Torque Vectoring System optimizing driving dynamics. Everything is being maxed out for major change.

“Tested to Thrill” pushes further than ever before the urban thrill of driving, encouraging people to engage, to configure and to test their Juke for themselves through an integrated campaign including TV, prints, outdoor, retail, digital and CRM running in over 20 European countries as of June.

The TVC idea is based on the analogy of an athlete pushing his limits to the max.  The New Juke personalised is being tested on a giant treadmill, staying a step ahead, in control, and pushing every sensation to the max thanks to its responsive drive, technology and personalised design. 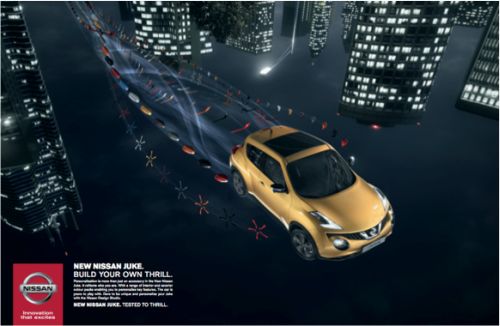 Rudi Anggono, Executive Creative Director, TBWA\G1, "To build on and continue Juke's heritage as the thrill machine, this new campaign pushes the capabilities of Juke by putting it through the ultimate test. The TV, print and the digital activation, all support the idea of a car that is being tested to bring maximum thrill to its drivers."

Gareth Dunsmore, Nissan Europe, Marketing Communications General Manager, says: “Now, following Nissan's established practice of constant development, comes the next chapter in the Juke story. Establishing itself as the original stand-out model in the growing small crossover market with premium style and sporty design, the new Juke is ready to once again stamp its authority on the segment it created” 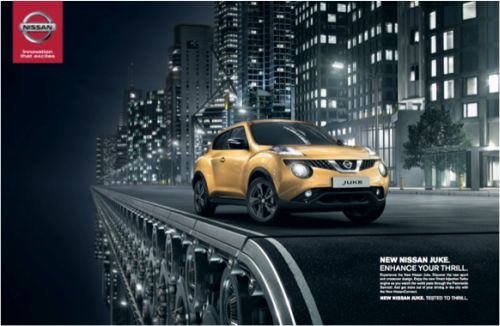 This campaign is supported online by D2NA, allowing you to test the new Nissan Juke's latest technologies virtually via immersive 3D animations and full size pictures.  The new Nissan JUKE personalisation offers can also be experienced in a 360° personalisation module giving viewers broader and exclusive customisation options. Discover the New Nissan JUKE’s design signature, its new LED lighting and its sporty crossover look, in a 360° exterior and interior virtual showroom. This digital product experience extends through to dealership where customers will also be able to test drive the new Nissan JUKE.

In CRM, Nissan owners are invited to get involved in this thrilling experience, putting them at the centre of the design process and encouraging them to test drive the Nissan Juke at their dealership.

A few owners were also invited to put to test the New Nissan Juke in exclusivity and share their thoughts through videos on Nissan product site.

More than 500.000 Nissan Juke’s have been sold across Europe since its launch in 2010, the New Nissan Juke will be available in showrooms as from June 2014.