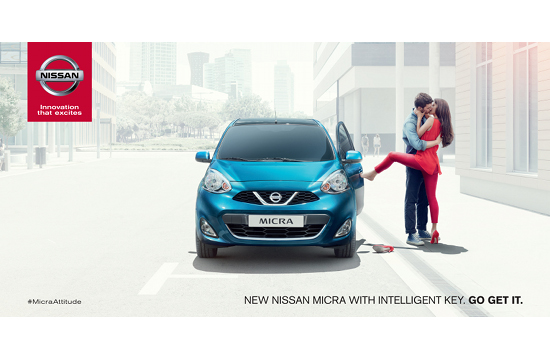 The Nissan Micra is one of the most emblematic models of the Nissan brand. With its new exterior design, enhanced interior and smart technologies, including the latest NissanConnect system plus Intelligent Key, the new Nissan Micra is an expression of the brand’s new statement: “Innovation that excites.”

This new model will be launched in September, with the support of an innovative pluri-media campaign.

Gareth Dunsmore, General Manager Marketing Communications, Nissan Europe: “With this new campaign we remain focused on the feminine targeting and positioning, which has been the long-term focus of this car since it was launched 30 years ago. The new campaign - “Go get it” - aims to continue appealing to confident women who will find, in the new Nissan Micra, their perfect ally to attack their active day.“

Rudi Anggono, Pan-European Creative Director, TBWA\G1, adds: « They focus on doing what they have to do rather than talk about what they should do. And that’s why the Micra fits their lives like a glove. It’s practical, agile, easy to drive and its technology helps them to feel empowered to do what they want to do. It helps them to feel confident. To simply « go get it ».

This strong attitude will be expressed in the campaign to be aired in September with the launch of the new Micra in Europe. It will be supported mainly digitally, through a series of three content videos featuring the Micra woman wriggling out of tricky situations with humor and confidence. These videos will lead to a digital platform engaging the audience to express their “Micra attitude” in daily situations. The campaign will also be supported through local sponsorship programs, print, outdoor and retail.