The campaign was made in collaboration with Nissan Europe’s agencies TBWA\G1, TBWA\Else, Digitas LBi, D2NA and OMD 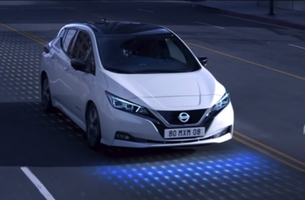 The introduction of 2018 Nissan Leaf begins a new chapter for Nissan Europe as they are now focusing on their Intelligent Mobility Technologies.

The campaign includes a full 360° communication plan brought to viewers in collaboration with Nissan Europe’s agencies TBWA\G1, TBWA\Else, Digitas LBi, D2NA and OMD. The campaign was elevated mid January with a film by TBWA\G1 called Journey Together. The story takes place over the course of a sunrise as a metaphor for the dawn of a new era for Nissan’s Innovative technologies.

The film starts at dawn as a woman picks up her friends for a weekend outing in the city. As the driver takes her sleepy friends through the city they become awoken and wowed by the Leaf’s incredible technologies. At the end of the film the characters come to a petrol station where they grab to-go coffees instead of petrol. The film shows that the Leaf is only filled with innovative technologies and nothing else… a subtle wink that it’s an electric car not “filled” with petrol.

“Journey Together” was directed by Fabrice Cotton, produced by Partizan and filmed in Los Angeles. The rhythm of the film comes from its track “Brest” by the French musician Rone. It’s the first time the musician has allowed his work to be in a commercial production.

Eric Pierre, Executive European Creative Director, TBWA\G1: " The new Leaf is not an electric car. It’s much more than that. It defines the car revolution that society is about to experience.”

Ewan Veitch President Nissan United, TBWA\G1: “We wanted this campaign to capture the very best of what makes Nissan truly innovative. The new Nissan Leaf offers a very different driving experience, one that is amazing everyday.”

Jean-Pierre Diernaz Vice President Nissan Europe : “The New Nissan LEAF is the icon of Nissan Intelligent Mobility and our vision to move people to a better world. The Simply Amazing campaign highlights to potential customers how driving can become an amazing experience thanks to innovative technologies. ”