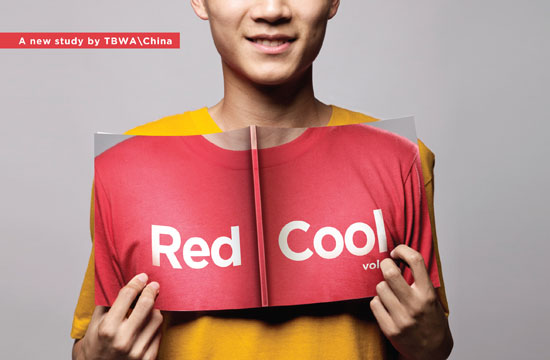 TBWA\China has released a new study on ‘what is cool’ among China’s youth generation and how to attract youth to one’s brand.

Partnering with 1626, a youth style and design magazine, TBWA\China recruited interviewees and conducted focus groups and in-depth interviews with key opinion leaders in the four of most important cities in China: Shanghai, Beijing, Guangzhou, and Chengdu.

In the second phase of the study, the extensive, quantitative research covered thirteen key cities across China (ranging from tier one to three cities) with over 1,000 respondents – half of them male and half of them female, ages 16-30.

“Cool China is rising, which is why we’re calling this report ‘RED COOL’,” said Ian Thubron, President of TBWA\Greater China. “Today’s China is changing so quickly, and the young consumer is more fickle than ever. In this study, we’ve identified 10 key learnings, called the ‘Levers of Cool’. Our findings – sometimes surprising and sometimes controversial – will help clients market effectively to youth by understanding ‘cool’ and injecting more of it into their brands.”

Milo Chao, Chief Strategy Officer at TBWA\China said, “RED COOL shows that Chinese youth are at this moment embracing optimism and creativity like at no other period in modern Chinese history. They are also opinionated. They know what they want in life, and if they don’t know, vow to keep exploring until they do. Given the optimism and level of creativity in the air, it is not surprising then, that young people say people who radiate positive energy, who are open-minded, take action, lead and influence others, and who persist until they achieve success, are cool.”

“There’s actually very little difference in the perception of ‘cool’ between the city tiers, but there is a marked difference between the generations,” commented Kevin Choi, Director of Creative Strategy at TBWA\China, and lead on the project. “Post-80s youth are self-possessed and want to take on the future, while post-90s youth want to live a fast and serious life. Boys and girls see “cool” differently from each other. Boys value career success and money, while girls value beauty and independence.”

The release of RED COOL in China is the sequel of TBWA’s ‘Let’s Talk Disruption’ seminars, which the agency has hosted since 2011. The ‘Let’s Talk Disruption’ series brings new learnings and disruptive perspectives that help brands grow in the fast-changing China market. Following the release of the RED COOL study, TBWA\China will release studies on luxury as well as health and wellness, in September and November respectively.

TBWA\China will run series of RED COOL workshops in July. To learn more about the study or participate in the workshop, please contact coolab@tbwa.com.