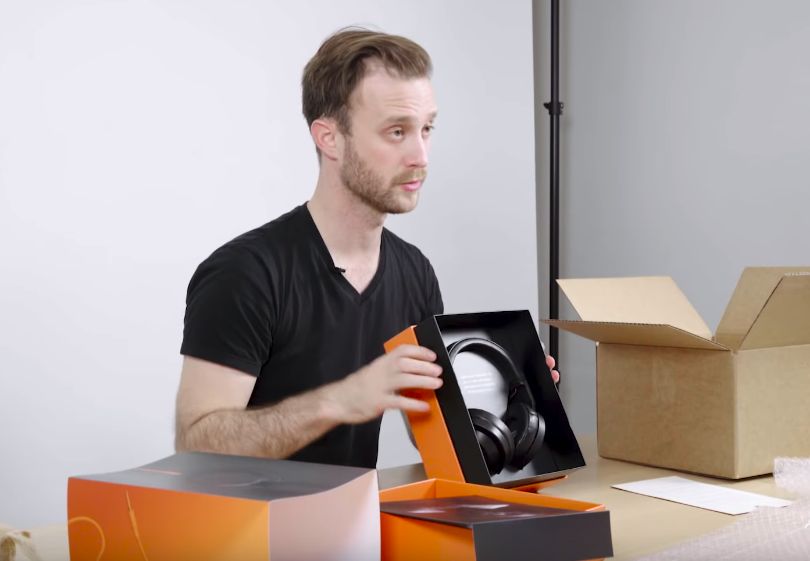 The Thomson Reuters Foundation released a new unboxing video this week, ahead of holiday shopping, in which popular tech influencer David Cogen unveils a pair of one-of-a-kind headphones.

Cogen is a tech industry expert who’s been featured on CNBC, Bloomberg and Fox to talk about the latest gadgets. The film sees him unbox a package that appears to contain a pair of upscale, wireless headphones. But a closer look reveals hidden and sobering statistics, incorporated into the design of the product and packaging, that expose the heartbreaking forced-labour tactics used to illegally harvest many of the natural components found in today’s most popular tech devices.

For example, the inside of the box is beautifully designed but reveals that 80% of electronic companies don’t track countries from which they source materials. When you expand the lids of the headphones, it reveals that 10 slaves are killed each month in illegal mines. The $90 price tag on the bottom of the box peels off to reveal that $90 is in fact the actual price of a human slave today. And when David put the headphones on, he heard a real story from a former slave whose friend was killed by a collapsing mine.

Inside the box is a letter from the foundation that explains the intent of the headphones: "It’s time to rally together to end these practices that are not only illegal, but also inhumane. To be clear, we’re not asking you to stop unboxing - or your fans to stop watching. We’re simply asking people to start asking the right question and demanding accountability."

The film is part of a campaign by the Thomson Reuters Foundation - the charitable arm of Thomson Reuters - created to emphasise, to a key audience of young, tech-conscious consumers, the 'human price' of products that we buy, with the goal of raising awareness and hopefully influencing future purchase decisions.

The Foundation made headlines over the summer with a video from popular YouTube star Jacques Slade, who unboxed a pair of 'slave-made' sneakers to underscore the endemic state of modern slavery, with emphasis on the fashion industry.

The Foundation annually awards a Stop Slavery award to companies that have taken concrete steps to eradicate forced labour from their supply chains. This year, tech giant Apple was among the recipients of the award.

The campaign was created by TBWA\Chiat\Day New York.