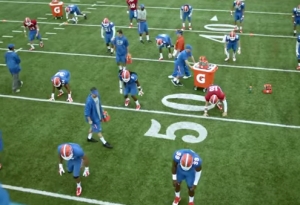 2015 is an exciting year for Gatorade as the brand celebrates its 50th anniversary. Gatorade will commemorate this incredible milestone throughout all of next year, starting with a brand new tribute spot, “50,” which aired for the first time on Christmas Day during the OKC Thunder vs. San Antonio Spurs NBA game, and will continue airing in the College Football Playoffs and Championship, beginning 12/31 on ESPN.

The ad celebrates 50 years of fueling champions by reminding everyone that the moments we celebrate in sports don’t happen without hard work and the fuel it requires. It was Gatorade’s purpose in 1965, and it’s still true today. The ad opens with a shot of the 1965 Florida Gators football team, the birthplace of Gatorade, and continues through a montage of 50 iconic sports moments related to the brand.