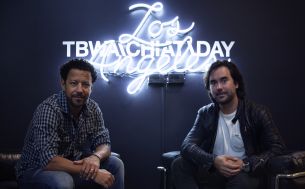 Remarking on the promotions, Anderson said: “Renato Fernandez is an almost unparalleled benchmark of leadership and drive. For the last 5 years, I've toiled alongside Renato as he relentlessly guides, protects and mentors work that truly matters, and work that defines the soul of our brands.”

“Doug Menezes has emerged over the past two years as leader of both concept and craft,” he continued. “His unique upbringing within the industry and recent work on Gatorade makes him a natural choice to help lead Gatorade and continue to involve the brand deeply in culture.”

Fernandez has been with TBWA\Chiat\Day LA since 2011, when he relocated with his family from Brazil. As Associate Creative Director, he played a major role in the pitch-winning team that brought the adidias World Cup campaign assignment to TBWA. In 2014, Fernandez assumed creative leadership of the agency’s Gatorade US business and, in 2015, took over all global projects as Worldwide Creative Director. He is credited with awarding-winning work that includes Gatorade’s now legendary farewell films for retiring athletes Derek Jeter ('Made in New York'), Abby Wombach ('Forget Me') and Peyton Manning ('Dear Peyton'), and the brand's latest global push - 'Don't Go Down' - featuring world-renowned footballer Lionel Messi.

Fernandez began his advertising career in 1994 in his hometown of Curitiba, Brazil and later joined Almap/BBDO, where he worked on top-tier brands including Volkswagen, Gatorade and Havaianas. Throughout his career, his work has been recognised at several international creative festivals and award shows, including Cannes Lions, D&AD, Clios, Clio Sports, and the One Show.

Doug Menezes came to TBWA\Chiat\Day in 2013 as a Digital Design Director, transitioning to an Associate Creative Director shortly thereafter to work on both Gatorade and Nixon accounts. His credits include work for Gatorade's 50th anniversary campaign, as well as its latest Olympic-themed filmed, 'Never Lose the Love.' Prior to TBWA, he worked as Associate Design Director with Crispin Porter & Bogusky in Miami, and also spent time working in digital design for Xishe and Wunderman in Dubai, UAE. Like Fernandez, Menezes is a native of Brazil, and cut his teeth as an Art Director working in several shops across Brasilia. He is a graduate of the Miami Ad School and Universidad de Brasilia.

The creative promotions are in addition to the promotion of long-time agency strategist Scott MacMaster, who was named Executive Planning Director on the Gatorade business earlier this month.