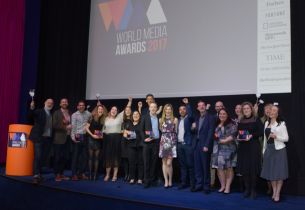 The winners of the 2017 World Media Awards were announced last week at an exclusive VIP event held at The Ham Yard Hotel in London. Launched by the World Media Group, the World Media Awards, now in their second year, are the only global awards to recognise brands and agencies that are creating the most effective cross platform, cross border, content-driven advertising campaigns.

“We’re delighted to have won this prize,” said Nick Vale, Worldwide Head of Planning at Maxus Global. “Supporting quality journalism in 2017 is something which I think is important to all of us. To do it by entering The World Media Awards and then winning – that’s super special. We’re absolutely thrilled.”

Emma Winchurch-Beale, President of the World Media Group and International Sales Director at the Washington Post commented, “We were delighted to see a notable increase in entries for this year’s World Media Awards with an impressive array of submissions from all over the world. As advertisers strive to target consumers globally, a successful content-driven ad campaign can be a powerful way to tell a brand’s story across multiple channels and borders.

“Tata Motors’ entry ‘From Zica to Tiago’ is a great example of this, inspiring consumers to truly engage with the brand on a personal level. Demonstrating authenticity, openness and collaboration, this innovative campaign is well-deserving of the Grand Prix award.”

A panel of 30 senior judges from major brands, agencies and media owners, presided over by three head judges – Ian Armstrong, Global Advertising General Manager, Jaguar Land Rover, Sanjay Nazerali, Global Chief Strategy Officer with Carat Global, and Raquel Bubar, Director T Brand Studio International at The New York Times – had the challenge of selecting seven category winners and a Grand Prix winner from the many entries that were received from across the globe.

The winners of the World Media Awards 2017 are: