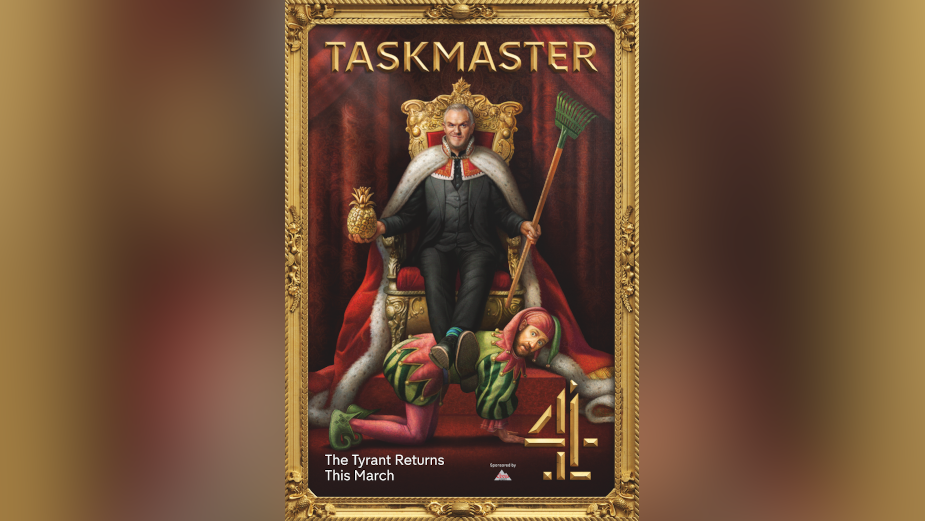 Channel 4 is promoting the highly anticipated return of Taskmaster this week - with an innovative marketing campaign devised to excite fans about the Bafta-award winning hit show’s return, whilst building upon the series’ success of even more task-related mayhem, following the success of its debut in its new Channel 4 home last year.

Now in its eleventh series, the new conceptual for the hilarious gameshow, fronted by Greg Davies and his loyal servant Alex Horne, will air for the first time tonight, Friday 5th March at 18.41 during Hollyoaks on Channel 4, and features a 12ft statue of the Taskmaster, Greg Davies, holding court and presiding on his throne.

As part of the campaign, which aims to bring Taskmaster’s unique world to life, Channel 4 has also teamed up with TikTok for an innovative activation where all UK users will be challenged to show how much they love the Taskmaster by creating  a #Taskmasterpiece. After all, “every formidable leader inspires great art” Alex Horne declares in the video.

The social campaign launching on 8th March will challenge the creative crowds on TikTok as well as influencers, talent and the wider public to get involved and create an artistic tribute inspired by Taskmaster – from a painting, sculpture, poem, serenade to a full transformation into Greg using makeup.

In addition, a partnership with Global will see show talent interrupt on-air broadcasts on Capital FM and Radio X from 8th March across the day.

Out-of-home advertising will entail the appearance of a renaissance style poster by artist, Dan Craig. Meanwhile on air, the renaissance style paintings will embed Daisy May Cooper, Bob Mortimer and Rose Matafeo, created by Creative Giants.

The campaign has been devised by Channel 4, 4Creative and OMD.

Zaid Al-Qassab, CMO Channel 4 said: “Taskmaster’s made a triumphant move to Channel 4 last year, and our second series is fast approaching. We hope we’ve done all fans of Taskmaster justice with a downright silly commercial and a way to take part via TikTok”.

Lynsey Atkin, executive creative director, 4Creative said: “The Taskmaster has proven himself a man to be feared as he presides over his kingdom of the absurd and chief minion Little Alex Horne. So to launch the second series of this inimitable gameshow, we borrowed from the language of dramatic legend to let audiences know that their favourite TV tyrant and his mind-bending tasks were back – and that seeing people’s pants is always funny”.

Greg Davies will return as the Taskmaster with series creator Alex Horne as his sidekick on 18th March.