The sport-focused campaign begins this week across TV, OOH, digital, retail and a documentary 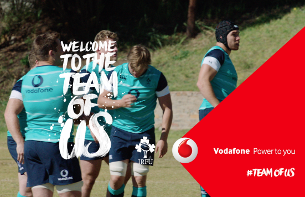 Vodafone’s #TeamOfUs bursts into life for the Autumn Series this week, via a campaign across TV, OOH, digital, retail and, in November, an RTÉ One documentary.

“The Vodafone #TeamOfUs sponsorship platform embodies our agency philosophy of creating culturally contagious ideas, and work we’re very proud of. We spent over a year getting under the skin of Irish rugby, working with our client, rights holders, academics, researchers and non-competing brands across three continents.

This led us to a platform that marries Vodafone’s expertise as a connector, to the uniquely unifying role that the national rugby team plays within Irish culture.”

Vodafone #TeamOfUs is a long term platform that will come to life during the forthcoming Autumn Series with a 360 campaign, spanning TV, OOH, social, activation, and even a landmark RTÉ One documentary airing in early November.

Most of the campaign materials were shot on location at this summer’s historic South African tour. The campaign will celebrate the interdependency behind the Irish rugby team – from the players and coaches, via IRFU and its partners, to the diverse fan base across the island of Ireland. This theme of interdependency will be a cornerstone of #TeamOfUs – now, and in the years to come.

Anne Mulcahy, Head of Brand & Communications, Vodafone Ireland said: “Our world-class ambition for #TeamOfUs is matched by a world-class approach, and so we’re excited to share it with people throughout Ireland this Autumn. We are confident that we’ve created something that breaks new ground in sports sponsorship and, more importantly, something that sports fans will love.”