Taproot India Wins The 2013 Grand CUP For 'I Am Mumbai' 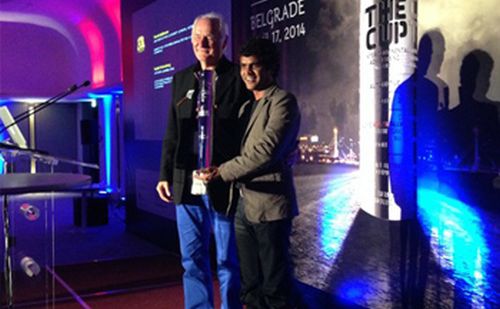 ADFEST announce that Taproot India has won the 2013 Grand CUP at the 7th Intercontinental Advertising Cup Awards in Belgrade on 17th April 2014 for its powerful ‘I am Mumbai’ campaign.

THE CUP celebrates ideas infused with local culture in opposition to the tsunami of faceless global communications. Only the 2013 finalists & winners from ADFEST, ADC*E, Golden Drum, and FIAP are eligible to enter into THE CUP, where they are judged by an international jury.

ADFEST would like to congratulate the following winners from ADFEST, which won 10 CUPs between them:

- McCann Melbourne won 3 CUPs for ‘Dumb Ways to Die’ (Metro Trains) for Best of Travel, Tourism and Transport (under Best of Products & Services); Best of Campaign (under Best of Media); and Best Universal Idea created in a Local Market (under Best of AdMaking)

- Dentsu Inc Tokyo won 2 CUPs for ‘Share the News Paper with Children’ (The Tokyo Shimbun) in the categories for Best of Communication Media and Publications (Best of Products & Services); and Best of Interactive (Best of Media)

“ADFEST has been a proud partner of THE CUP since its inception as the only festival in the world that celebrates local culture. Yet again, agencies from the Asia region have excelled at THE CUP, reflecting the diversity and richness of our region,” says Jimmy Lam, President of ADFEST.

“We would like to congratulate this year’s CUP winners – in particular Taproot India, which is the fourth agency from ADFEST to win the Grand CUP in THE CUP’s seven-year history,” says Lam.

Previous winners of the Grand Cup include Clemenger BBDO (Australia) for National Australia Bank’s ‘Break Up’ (2012); Beacon Communications Tokyo (Japan) for its Yubari City Project (2010), which also the Grande Lotus Roots at ADFEST 2010; and GT Tokyo for its viral ‘Love Distance’ campaign for Sagami condoms, which won the Grand Cup in 2009.

Taproot India's 'I AM MUMBAI'