CHI & Partners and Academy snuggle up for sponsorship campaign 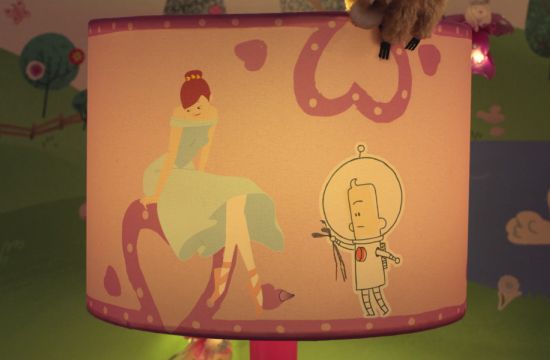 This Saturday Sharon Osborne brought her own unique brand of fiery frankness to panel of power on The X Factor UK – and TalkTalk returned as headline sponsors of the ubiquitous talent show with a romantic brand ad.

The campaign celebrates the fact that TalkTalk’s TV service is the fastest growing in the UK a year after launch.

‘Date Night’ sees two characters come to life in a typical family home and follows them on their unusual romantic adventure. The campaign was created by Neil Clarke and Jay Phillips at CHI & Partners and was directed by Si & Ad through Academy.

According to creative director Neil Clarke, the spot is a twist on the romantic, snuggly night in. “Date Night is a typical love story; boy meets girl and they go on a fun-filled adventure together. It just happens that our two characters are made from fabrics within a family home. One is a cute little spaceman on wallpaper, the other is a ballerina on a lampshade. Together, they travel through different surfaces and textures of a family home, ending with the pair snuggling up on a sofa to watch a romantic movie. Si & Ad have brought to life two loveable characters and given this film bags of warmth and charm.”

The concept has been extended into The X Factor sponsorship ads. These feature more characters coming to life to enjoy their favourite slice of competition karaoke via TalkTalk TV. The sponsorship idents were created by Colin Smith and Angus Vine, directed by Academy Films duo Us. There are 30 bespoke idents.