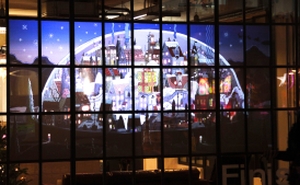 Finish has revealed its Christmas themed window installation, created by design-collective Shy The Sun. The post-house has enlisted the help of design-focused production company Strange Beast for a snow globe inspired display, which will run from 10th December through until January.

South African based Shy The Sun – a collective of designers, illustrators, sculptors and animators signed to Strange Beast – have created an animated winter wonderland for the window of Finish’s Wardour Street headquarters.

The task was to create something that would celebrate the festive season and wish passers by a Merry Christmas from Finish, leaving the creative brief open to the designers.

Finish Co-Founder Justine White comments ‘The Christmas season was our brief and the snow globe was all them. It could’ve been abstract or literal - it could’ve been anything as long as it was Christmassy. Our audience are the Soho passers-by, so the main idea is to create an enchanting loop which captures their attention for a few seconds and hopefully makes them smile.’ 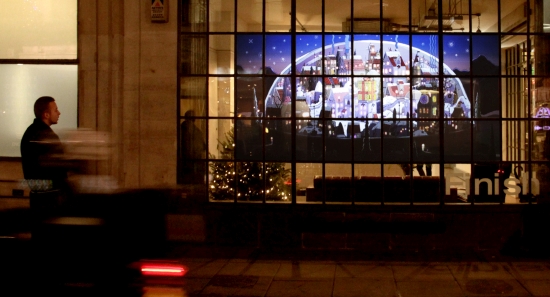 Jannes Hendrikz, Animation Director from Shy The Sun, says ‘Who wouldn’t want to create a giant Christmas card for the streets of London!? The snow globe came to mind and felt right. The window seemed like a natural container, or rather a natural porthole to a world in which the snow globe could exist. The scene depicted inside the snow globe was inspired by those classic depictions of quaint European villages in the mountains during Christmas time. Our plan was to keep it fairly simple so it reflected some of the naivety and innocence of an endearing little Christmas card. Having said that, the scene is littered with little animation loops, so the more you study the details and animation the more you see - a kind of a Where's Wally type scene. So hopefully the viewer will see something new every time they walk by.’

Discussing how the collaboration came about, Justine says ‘We approached Strange Beast because, as a company, they’ve got such an interesting roster of directors. Sam has people on her roster who she’d thought be appropriate and she put forward our brief to Shy The Sun, who then came back with their idea.’

It’s a unique platform which offers an endless array of artistic possibilities, although its poses some technical challenges for the creatives. The 3m x 1.5m screen is situated within the vast window space across the front of the Finish office and is made up of 27 panes. ‘One of the challenges for any filmmakers who are making pieces is the grid between the panels.

Obviously they get in the way of a usual flat screen, but it gives them a creative dilemma that they can hopefully embrace’ says Justine.

Jannes comments ‘There were only a few minor technicalities to be aware of. We had to make sure that the linework was clear, based on the projector's brightness and resolution, also checking that colour and contrast looked right in different light conditions outside when it changes between day and night. We work from Cape Town so obviously checking these things had to be done by our people over there, and photos and videos were sent so that we could make the necessary adjustments. On top of that we picked a colour palette that would be complimented by the environment around the installation, making sure that it would stand out.

‘The screen definitely comes into its own in the darker winter months and this charming piece will certainly light up Wardour St’, adds Justine.

This year’s Christmas installation isn’t the first time that Finish have used their window space for artistic purposes. One of the first artists to display their work on the office-front platform was Doug Foster, who collaborated with Finish to display one of his art projects in 2011.

The video artist came up with ‘Convolver’, in which Foster divided the twenty-seven panes into nine horizontally spaced time delay zones so that, as people walked past, twisting coils of light waft in the wake of the passers-by.

With Shy The Sun leading the creativity this time round, Finish mainly involved themselves with the project’s technical aspects and regularly screening the film during the production process to check colours and ‘It’s a brilliant platform to utilise and we’d like to have a regular feature going,’ says Justine, ‘Not only will it tie in with seasonal events, such as Christmas, Valentine’s Day and Halloween, but we’ll be opening it up for other creative, artistic ideas.’

The window went live on Wednesday 10th December and can be seen at Finish, 140 Wardour Street. To share the window across social media, use #finishwindow.