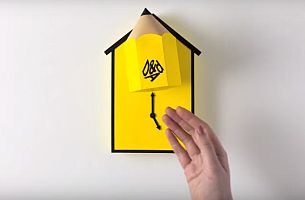 “When you see something come to life that you’ve made, even if it’s two seconds long, you get a rush of ‘oh my gosh’, I made that happen,” says Amy Shields, Animation Director at Picturesmith.

In order to inspire the entrants for the New Blood Awards, D&AD worked with After Hours and Picturesmith to create a series of four films that would take students through the whole New Blood process. From opening for entries though to guiding them on submitting their work, each step along the way had an accompanying stop motion film.

After Hours’ Creative Partner, Chris McDonald, talked about inspiration for the campaign “The identity for the New Blood call for entries campaign is built around the central idea & end line 'It all starts with a pencil’. The concept and execution centres on the dual interpretation of this phrase: That just as every great creative idea begins with putting pencil to paper, so a creative career is launched by winning a D&AD New Blood Pencil.”

“In order to bring this idea to life we decided stop motion animation would be the perfect medium. The use of real hands and hand crafted paper models allowed us to showcase the journey from pencil marks on paper through to winning an award in visually compelling sequences capturing the true spirit of the creative process.”

“The possibilities in stop motion are endless, you are only limited by how creative you are.” George Carman, Animator, Picturesmith

The project doesn’t stop here, Picturesmith will be creating more stop motion animations to accompany the D&AD New Blood Festival, New Blood Ceremony and the New Blood Academy, so there’s much more to look forward to over the coming months.

Watch the series so far: