Take a Cheeky Peek at 33Seconds' #DashboardDiaries for Peugeot 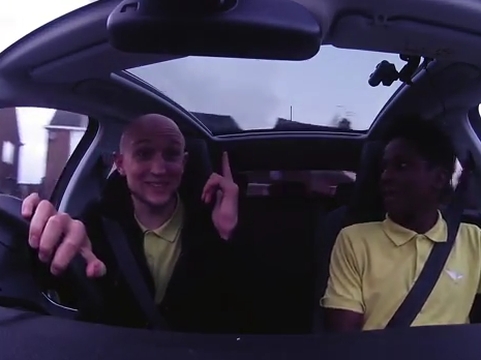 If you’ve ever wondered what kind of things the interior of your car sees every day of its life, Peugeot can provide the answer. Dashboard Diaries is a series of short films that will be broadcast across Peugeot's various internet channels for three weeks starting from November 24.

Dashboard Diaries is an amusing, sometimes hilarious and occasionally moving portrayal of ordinary life for three British families. Each was loaned a Peugeot 308 for three weeks on one condition: their every embarrassment, conversation, crossed word, wrong turn and unforeseen occurrence would be captured on in-car cameras.

The result is a series of 30 to 60-second films that have been designed to show real people having real-life experiences at the wheel of the 308 – in an engaging and entertaining way. A new short film will be shown every day for the duration of the campaign.

The idea was conceived by agency 33Seconds. The company’s Director of Content and Social Media Sebastian Underhill said: “Peugeot wanted something that would capture the public’s imagination and tell the story of the 308 through the eyes of the people who drive it.”

The three families, from as far afield as Brighton and Nottingham, were selected for their star quality. One is Chris Price, 26, from Leicester. With four-year-old daughter Lily, Chris has already had more than 2.5m Youtube views for their in-car singing of the hit ‘Let it Go’ from the Disney movie Frozen. Underhill revealed: “How viewers will relate to the characters are what will make these films special and the variety of situations we’ve captured make for addictive viewing. The casting was crucial. The characters must be compelling.”

Another compelling point is the stage the films play out on – or rather in. Ever since it was voted 2014 European Car of the Year, the Peugeot 308 has been accustomed to taking a starring role. But Dashboard Diaries shows how it’s an accomplished support act too. “The New 308’s versatility means it’s ready for whatever daily life throws at it. Who better to demonstrate its styling, reliability, and comfort than real UK families?” Andy Goodall, internet manager at Peugeot UK said. “Our aim with Dashboard Diaries was to showcase our European Car of the Year in a far more tangible way than a traditional car advert ever could.”

Working with esteemed production company My Accomplice, 33Seconds amassed more than 100 hours of raw footage. “Editing was a very manual process,” Underhill revealed. “We just had to watch it all in order to pick out the gems that will go into the final films. It’s a very simple idea; it’s very easy to film; and it’s the kind of thing everyone can take part in. We’re hoping that by using #DashboardDiaries people will engage with it and show their own clips too.”