Take a Behind the Scenes Bite with Jelly Kitchen's A Team

Trends and Insight 408 Add to collection 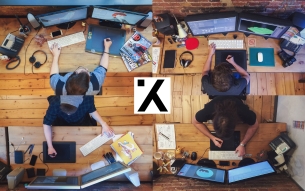 Ever wondered what inspires the jelly talent? What drives them? What a typical day is like?

jelly London's Head of Creative Comms Rachael Guiver, went behind the scenes with jelly Kitchen's A team to find out how it all started, what they love most about their job, and just how they create their dynamic and bespoke animations each and every time...

RG> Tell us how it all started.

Sam> As the in house team at jelly grew and began taking on bigger projects. We decided to create more of an identity for ourselves as directors. Kitchen was born at the start of 2014. It has been a great first year with loads of projects we are proud of.

George> When I came to TBM about 4 years ago it was just Sam. Together we decided we wanted to create a more finished project rather than just animatic’s.We created a ‘Making of an Animatic’ for TBM. I think this gave us the opportunity to work with Jelly more as we were asked to create an ON/OFF promo which we loved doing.

Myles then joined us, who not only brought more manpower but a more established interest in 3D projects. Along with then intern, Chris M, we decided to put each of our strengths and interests together in one project. Along with in house and other projects like French Connection we developed a stronger skill set that we could take forward.

So the Kitchen was born.

Rhys> Well, for me, Sam just kinda found me online and asked if I was around for a chat. We had the chat and one thing lead to the next. I’m the newbie.

RG> What’s a typical day like for you? How do you come up with all your new concepts?

Sam> It all depends on what projects we have going. There is no typical day really as it can range from creating treatments, storyboarding, animation or shooting something in a studio. Thats what keeps the job interesting. We always have a break to play a bit of ping pong, gives the eyes a rest from the screen.

All sorts of ideas are continuously running through my head. Watching TV, reading, on the train, walking around, trying to sleep, whilst sleeping. Anything can be an idea I guess.Sometimes I find looking at too many blogs actually does the opposite of inspiring me, as there is so much good and diverse stuff, I wonder what else I can do. So I find it easier to come up with initial ideas away from the computer.

I tend to write the ideas down in my phone and if I like them when I re read them later on, I will share with the others when we get together around the Ping-Pong table, in the centre of our room, for a brainstorm.

Myles> Well every day has to start with a good cup of coffee, and a pre game of ping pong.  Then it’s down to work.

Working in the Kitchen is quite easy to be inspired, as we are often shearing concepts, ideas and even the odd animation. And my personal idols would have to be Pixar, and good old Aardman. I love a bit of 3D character animation, but some times there’s nothing like a cracking bit of clay motion.

Rhys> The days are usually started with finding a good playlist and having a quick browse through some animation and design blogs. If I have a magazine it’s good to see what’s going on in the creative world from the usual names. Creative Review, Computer arts, Adweek and my Vimeo feed. Social media plays a huge part in seeing what’s going on. Twitter and Instagram are great to see what people are all working on. Idols are around pretty much everywhere. I think due to the nature of the creative world, you see work around every corner where you feel a mix of envy and awe.

The Making Of Cadbury

RG> What do you love most about your job?

Sam> The variety of the projects we get to work on. Each job brings its own challenges and rewards.

George> The freedom to create what we think will look best.

Myles> Working on a variety of projects and animation, from stop motion to 2D and 3D. Trying out new techniques and always pushing your self to learn something new.

Rhys> All sorts, the work is great fun with a huge scope on the creativity. One day we could be working on stop motion the next in 3D software. The guys here all know to crack down and get stuff done. And seeing them focus really drives me to do the same. And if there is a quiet moment, the studio is great place for a game of Ping-Pong.

Behind the scenes of Converse Hack

RG> What is the most challenging part?

Sam> Having to find a way to give the client what they want within the often tight deadline.

Trying to keep each one fresh at the same time.

Rhys> I think as the newbie and as a graduate, coming into a proper job has been the toughest challenge. Especially with the way I personally work to fit the studio’s needs, hopefully some of my own flare is brought into the new work too though.

RG> You’ve got an impressive portfolio, tell us a little about what it was like to work for such super clients.

Sam> A stand out project has to be Converse. It was our first proper stop motion job as well as our first official job as Kitchen. We worked closely with Flo Heiss as creative Director. He was great and gave us a lot of creative freedom, which meant we were able to collaborate in order to produce something we were all really happy with.

Sam> Each project brings something new and enables us to try new methods and skills.

George> I think each project is special because it’s a development from the last. Even when you are happy with the finished product I find I always look back and wish I could do more. But that’s why we do it I guess, to improve and get better.

Myles> Working with animation is like being a puppet master, it’s a kind of extension of you. So I guess you could say that every project is special.

Rhys> I think with any work seeing something you have created go out live into the world is awesome, and I don’t think that will ever get old. The self-initiated ones we’re all working on are always great as you can play around with the work as freely as you like. The jelly Kitchen Christmas ident was great fun to be a part of.

RG> What do you think will be the next big thing (trend) in animation?

Sam> Virtual reality is getting bigger with the addition of DIY headsets using your smart phone. I sure traditional animation will adapt to fit into new tech like this.

Rhys> Live animations and experiential design. We’ve seen a huge boom in live art the last few years with a leap in technology and work like projection mapping. And I think with new technology like Oculus Rift and the cheaper Google Cardboard AR alternative, we’re going to see some really strong work this year.

RG> What does animation do that other mediums can’t?

Sam> It gives so many possibilities in the way you get your message across. There are so many different styles and techniques, which can be used to create the mood.

George> Represent the imagination in its fullest.

Rhys> I think, at least to me what animation has that other mediums don’t is its ability to connect with people. Animation makes people smile, feel sad and everywhere in-between. Film has the same effect but animation is different. You are stripping information down to its rawest forms. A mix of simple images, typography and sound can explain complex ideas clearly in a way that wouldn’t engage people otherwise.

The Making Of Converse Hack

RG> What would be your perfect brief or dream client?

Sam> A music video would be good fun. Where we get total creative freedom and a massive budget to really push the boundaries.

George> To do a Simpsons couch gag. It would definitely be the most stressful and nerve raking, but would be a dream.

Rhys> One with no budget. Could go nuts with tech and ideas. Maybe have a crack at a television Ad. Some Christmas or a cartoon channel ad would be good, I think any ‘super’ brand would be good too. Nike. Google. Coca Cola.

Sam> We have lots of exciting projects ahead. So stay tuned…

George> To strive for ALL.

Rhys> I’ll decide in December when I think about what I wish I had done. Last December I had a crack at learning some processing and animating with code. I’d like to take that further.

Sam> There always seems to be cake in the office so that does the trick.

George> Birthday cake, ice lollies and anything we can scavenge from upstairs in jelly HQ.

RG> What’s your favourite music to work to?

Sam> We have ‘Kitchen’ playlist, which everyone has contributed to. So there is just about every genre of music on there.

George> I’m always partial to All Saint Never Ever on a Friday if I can sneak it on, but if not, its all about the danceable party tunes.

RG> What’s your favourite decade and why?

George> I’m not sure. I don’t really know dates of when things happen. If I choose one then I feel like I have left other things out and betrayed them. I want it all.

Rhys> Never actually thought about this. Do people think about this often?

RG> Describe yourself in 3 words.

Sam> Jack of all… Down to earth, Avid Cartoon Watcher

RG> Tell us something about yourself that we didn’t already know.

Sam> I can ride a unicycle