Take a 360 Tour Of Shinola With Reel FX

The Video, Directed By Andrew Wilson and Luke Wilson, allows viewers to make their way through Shinola's Detroit Factory 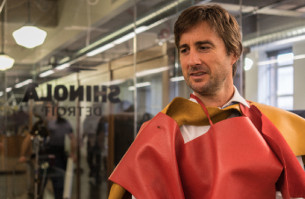 Reel FX (Dallas/Santa Monica) enlists the effortless deadpan humour of actor Luke Wilson to bring viewers along for an eccentric and at-times amusingly clumsy tour of Shinola’s Detroit factory and offices in a new 360° video, produced direct-to-client. The 4:32 piece is helmed by actors and directors Andrew Wilson and Luke Wilson and allows viewers to make their way through the factory of the upscale retailer of watches, bicycles and leather goods, taking in a full 360° view of the space as Luke Wilson guides them along. The experience fuses the comedy finesse of the Wilson brothers with the technical VR and filmmaking expertise of Reel FX to take the idea of a simple factory tour to the next level.

The immersive tour allows Shinola fans everywhere to experience the foundation of the Detroit-based brand: its people. The Reel FX team worked closely with Andrew  and Luke Wilson to unite the signature comedy style of the impromptu duo with the newfound 360° set space that comes along with VR. This allows viewers to interact with the Shinola space and staff while also taking in a bit of the company’s history. They utilized the new-to-market Nokia OZO camera, touted as the first VR camera purpose-built for professionals, making use of the real-time HMD monitoring to streamline camera placement and shot composition and make the most of their on-set time. This new technology, combined with Reel FX’s proprietary post production workflow tools, allowed for the team to spend their time on the creative process, rather than harping on the technical challenges that are often inherent in the emergence of VR filmmaking. The behind-the-scenes video, which features the original track “Detroit Seal” by Pato Motown, takes a closer look into this process.

Notes Reel FX Head of VR & Interactive Steve Nix, “As an early pioneer in the VR space, Reel FX has aggressively embraced new technologies. This was an amazing opportunity to advance those efforts while engaging the talents of Andrew and Luke Wilson to tell the story of Shinola’s vibrant company culture in Detroit.”

“In 2012 we built a watch factory in Detroit and called it our home. The city and the people who assemble our products are at the core of everything we do. This film allows those who cannot make a trip to Detroit to take a peek into why we chose Detroit and what drives us every day. The combination of Luke’s sharp humor and this new technology was the perfect match to express the brand in a way that is both fun and informative,” said Shinola’s Bridget Russo.