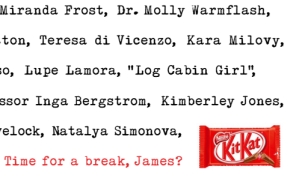 To mark the launch of Spectre, the hugely anticipated Bond Film, JWT London has created this tactical Campaign for KitKat set to appear on Monday 26th of October, the day the film is released.

It will appear in press, on a 48 sheet poster site in Camden and on a digital projector display on the platform at Oxford Circus tube station next to an official poster for the film.

Alex Ball, creative, said:  “As the champion of ‘breaks’, KitKat felt it only right to offer one of the world’s longest serving spies a little break from the arduous and often physically exhausting tasks he is forced to undertake for Queen and country.”

The poster lists all of the main Bond girls and suggests, with a Moore-era Bond arch eyebrow, that he might need to take a (short) break, playing on KitKat’s 80 year old end line of “Have a break, have a KitKat”. 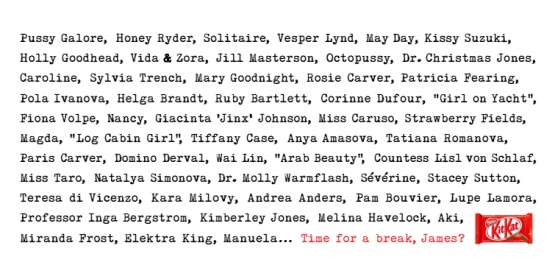