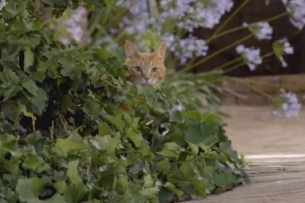 FCB Joburg has given the typical ‘man’s best friend’ storyline a unique twist to introduce the new Toyota RAV4 to the South African public.

It opens on a RAV4 packed to the roof with all the gear necessary for a weekend of fly-fishing – rods, waders, cooler boxes, chairs, tents, luggage, sleeping bags and so on. As the boot closes (automatically – a new feature), a cat quickly jumps into the RAV4, its tail disappearing amongst the gear.

The RAV4 arrives at a secluded camping location and, when the vehicles occupants open the boot to unpack after using the reverse camera to assist them to park, they find the cat comfortably reclining on the camping gear. The rest of the ad shows the couple plus their feline companion enjoying the outdoors and concludes with the campaign’s take-out ‘Anyone can find their adventure’.

FCB Joburg created the campaign following a brief from Toyota SA’s marketing team to drive the RAV4 to the top of small SUV segment by appealing to its key target audience of males between the ages of 35 and 49 years old. Other goals are to show-off the vehicle’s strong and dynamic design, its new standard features and the value-for-money starting price of R334 300.

The agency’s solution was to lead with the 40-second TVC (which will be cut-down to 30-seconds after flighting for several weeks), a 40-second cinema version and YouTube upload, as well as print. The former elements break late in January while print starts with March editions.

“Directed by Jono Hall from Darling, the TVC is light-hearted but packs a hefty punch in terms of communicating a great deal in terms of the RAV4’s features,” said Morris. “I think we’ve managed to clearly show the RAV4’s capabilities but do so in a way that is unforced and natural, and incorporating the subtle humour and unexpected twist South Africans have come to expect from Toyota.”