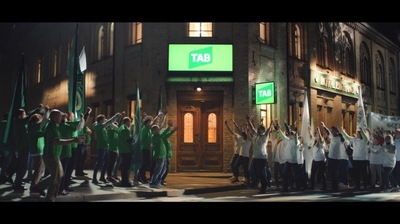 TAB and Clemenger BBDO Sydney have launched a campaign ahead of the 2018 FIFA World Cup, 'Head or Heart'. The campaign brings into focus the greatest rivalry in sports betting, the battle between the pragmatism of betting with your head, and the pure gut feel of betting with your heart.
The integrated campaign includes a 60 and 30 second TVCs, retail, product spots, social, digital, print and live activations in venues across Australia throughout the tournament. The creative aims to celebrate fans no matter which 'team' they barrack for, or how they punt and pays homage to the one of the most recognisable and anticipated parts of football, the chant.

Says Louise Rathbone, head of marketing communications, TAB: "The SWC is a global sporting event, and our biggest campaign of the year. To recognise this we wanted to ensure our campaign truly embraced all punters and soccer lovers alike, by tapping

into a key behavioral insight: when it comes to wagering there are two approaches you can take - bet with your heart as a true fan or bet with your head as a shrewd follower of form. Our campaign has been designed to celebrate both those betting styles on a grand scale."
Says Brendan Willenberg, creative director, Clemenger

BBDO Sydney: "Do you bet with your head or your heart? It's an adage as old as wagering itself and nowhere is it more applicable than the Soccer World Cup. We've had a lot of fun bringing this campaign to life and over the course of the tournament to hopefully

prove once and for all which is the best way to punt."
view more - Creative