‘The Impossible Tattoo’ from Anomaly Amsterdam and The Mill offers a glimpse at the possibilities enabled by the 5G network, with the first ever remote tattoo placed successfully in real time onto human skin 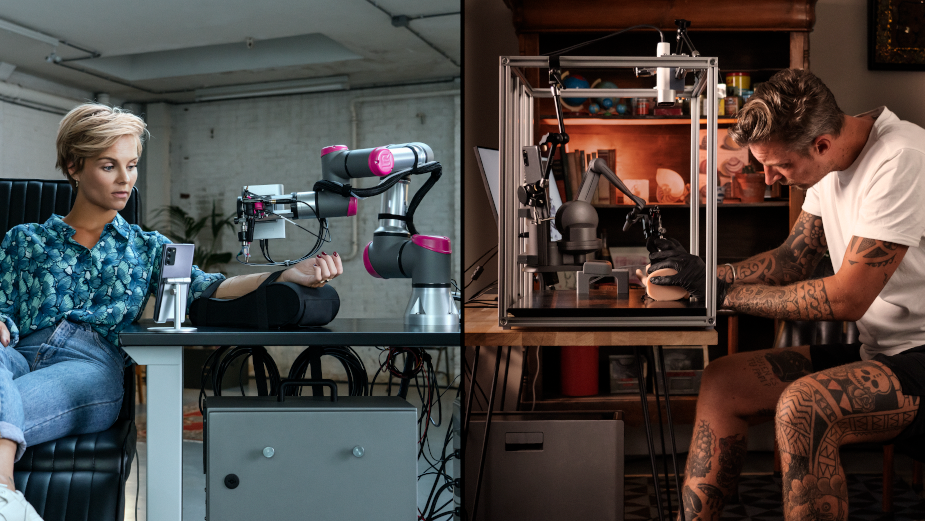 Anomaly Amsterdam, T-Mobile’s creative communications agency in The Netherlands, developed the campaign ‘The Impossible Tattoo’, to underpin T-Mobile’s reputation as The Netherland’s most trusted network. The new ad campaign features a film that documents the world’s first ever remote tattoo, powered by T-Mobile’s 5G technology.

The tattoo was executed by a robot arm, which was controlled by a tattoo artist in another location, who placed the tattoo onto Dutch actress and TV personality Stijn Fransenm in real time via 5G. With the new benefits of the network, there is virtually no delay, which means an action with millimeter accuracy can be performed no matter the distance. ‘The Impossible Tattoo’ convincingly shows what speed, greater reliability and low latency mean in the real world.

To bring the idea to life, Anomaly teamed up with global creative production partner The Mill, whose team of technologists spent several months researching and developing the cutting-edge technology in order to execute the tattoo. The Mill both built the custom robot tattoo arm needed for this groundbreaking feat, and also created the film that captured it. Dutch tattoo artist Wes, was deeply involved in the research and development of the remote tattooing technology, ensuring a multitude of factors were taken into account when replicating the intricate art of tattooing. The final tattoo was given after countless tests on an army of heroic vegetables and prosthetic skin samples.

Footage of the process covers everything, from building and testing the robot arm to the tattooing, which will be used in online communication and national broadcast for T-Mobile.

T-Mobile technology strategist Richard Marijs comments: “5G will offer us unprecedented new possibilities in the field of connectivity and mobile internet. We are very proud to have made it possible for tattoo creation to take place from different locations. Thanks to the low latency of connectivity in a live environment via our 5G network in the heart of (busy) Amsterdam. And this is just the beginning."

Creative directors at Anomaly Afshin Moeini & Christian Poppius comment: “Instead of just talking about what the future could bring us, we wanted to show what 5G is really capable of. To be able to fully trust a tattoo artist remotely tattooing your body... It’s that needle-to-skin tension that makes this so powerful and we knew that if we’d pull it off, we would create something incredible that has never been done before.”

Technical lead at The Mill Noel Drew comments: “There were three lanes of initial development. Firstly, we needed to work out how to track the tattoo artist's movements and detect when he was making contact with the surface of a fake practice arm and transmit this data over the 5G network. Secondly, we had to develop a robotic platform that could receive this data in real-time and control the robots movements in relation to the human arm. Thirdly we needed to develop a deep understanding of the fine details of tattooing.”