#SXKO bash designed to get Austin music and interactive media festival off to a rocking start. 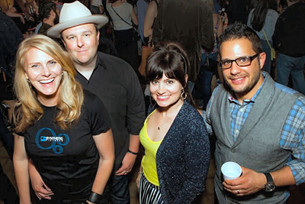 What better way to spend Friday the 13th than getting in the proper mood for five days of mind-expanding music, media, panels, networking and partying? That’s the idea behind the 2015 South By Kick Off party, held last Friday night in Austin. More than 600 industry insiders and tastemakers made the scene, which included agency folks from shops like GSD&M, JWT, Deutsch and others.

The event was co-hosted by a quintet of top players in the creation and production of advertising content. The gang of five was led by Synthetic Pictures, the L.A., New York and Austin-based production company, and Yessian Music, the Detroit, New York, L.A. and Hamburg, Germany-based original music and sound studio. Also co-hosting the event was Union Editorial, the bi-coastal creative editorial and post production house; Apache Digital, a recently-launched color grading boutique in Los Angeles; and Laundry, the design, CG and visual effects studio.

The #SXKO party took place at Rattle Inn, the rambunctious honky-tonk in downtown Austin that’s home to live music and numerous rollicking private events. Entertaining the guests was a mix of artists reflecting the diverse tastes and styles that SXSW attendees have come to expect. The talent lineup was headlined by the hip-hop artist Chali 2na (of Jurassic 5) & the Funk Hunters – who had the crowd moving to the beat for much of his set – and included the Austin-based blues-rockers Leopold and his Fiction, the electro-rock group Flashclash and the indie folk band The Lonely Wild.

Kicking off at 8 and running into the early hours of Saturday morning, #SXKO served to not only set the mood for the events to follow but also acknowledged the growing importance of the festival to the advertising, marketing and media industries.  “Our clients know that SXSW is the place to be this time of year,” said Synthetic Founding Director Justin Corsbie. “Given our Austin roots here at Synthetic – this is where we first opened our doors back in 2002 – it just made sense that we co-host a bash like this for our many friends in the business.”

Among Synthetic’s friends who made it to the Rattle Inn were Mike Judge, the animator, writer and director who created “Beavis and Butt-head” and “King of the Hill,” as well as the feature comedies “Office Space” and “Idiocracy.”  Also making the scene was Lukas Nelson, the guitar-playing son of country music icon Willie Nelson, whose band, Lukas Nelson & Promise of the Real, will be opening for Neil Young on his upcoming tour.

Michael Yessian, Partner/Head of Production at Yessian Music, said SXSW’s pre-eminent role in defining new directions in pop music made it the perfect venue for a Yessian-sponsored event. “People look to companies like ours to know where tastes and styles are headed, and this is the nexus of influencers and tastemakers,” he said. “That’s what makes #SXKO such a great party. You pick up such great vibes here, and bring back creative resources that make you better at what you do.”

This is the 3rd year Synthetic and Yessian have teamed with other production and post houses to host a kick-off event for the SXSW Conferences and Festival, and Synthetic’s 6th year overall as either host or co-host of the kick-off bash. As in years past, the party was a multimedia affair, with projection screens beaming images, video clips and live tweets throughout the night. This bash was no different, as prizes were handed out for the most outrageous photos posted to the Twitter hashtag #SXKO during party.