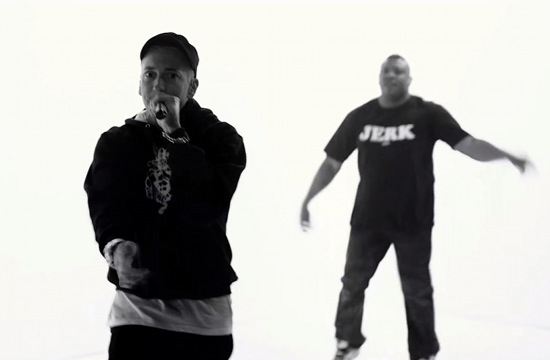 When YouTube selected Spike Jonze to organize its first annual music awards, the renegade director threw out all the clichés. Jonze selected a cavernous warehouse to displace the usual theater space as the event venue, and dispensed with the red carpet roll ups. The evening’s hosts were tasked to improvise in lieu working off a script; and, rather than staging a series of typical musical performances, the show featured the filming of live music videos by enormous names such as Lady Gaga and Arcade Fire. At the end of the evening, directing collective Syndrome delivered an earth-shattering grand finale: the video of a debut single by Eminem, created live in one take before the show’s audience.

In a riveting pop-cultural moment, the iconoclastic rapper, who has worked on many projects with Syndrome in the past, delivered an intense, first-time performance of the six-minute epic Rap God. The song comprises six wildly different historic rap styles that at once encapsulates the pantheon of hip-hop and forcefully asserts Eminem’s status as a leader in the music game.

“This was easily one of the most intense performances Eminem has ever given,” states Syndrome Director James Larese. “The live filming of music videos on this scale has never been done before. We had no way of knowing what was going to happen, but it was absolutely awesome.”

Syndrome spent weeks preparing to live-direct the shoot. Using just four cameras aimed at the performer, the team blocked various angles and shots to identify the optimal positions for capturing the interplay of the strobe effects with the dramatic half-black, half-white stage. During the show, a live crew in an edit truck cut to pre-determined angles throughout the performance, delivering the live edited music video to the audience as it was filmed.

“The idea is to create all these little moments that would normally take hours to capture, and synch them up in one take, live,” continued Larese. “It was an enormously ambitious undertaking and there was no one we would have rather had behind the wheel than Spike Jonze. It was so amazing to watch him do the blocking for Arcade Fire and Lady Gaga. He is so approachable, so supportive, so eager to try new ideas, so forgiving of mistakes. He also fiercely resisted budget constraints from show organizers, delivering a rare thing in production: an open, budget-less frontier where we can simply create.”

Syndrome most recently partnered with Eminem on a music video and spot for Call of Duty: Ghosts. Prior collaborations include music videos for Berzerk, Crack A Bottle, and 3AM, and an additional spot for Beats by Dre. “Shady Records realized that this is more than just pointing the camera and recording – it’s feeling the artist out and catching who he is and what he does, which is very specific,” explained Syndrome EP Monica Blackburn. “There is a level of trust that we’ve developed by nurturing this relationship over a long period of time.”