LBB, in conjunction with Syncbubble, are launching a new musical experiment and we’d very much like you to join in 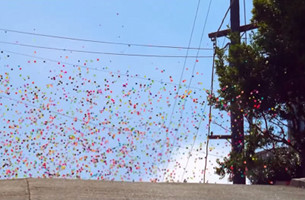 Music is the forgotten hero of advertising. Just think of your favourite ad and chances are your brain will immediately become awash with the swaggering baseline of Southern Comfort, the thumping drums of Phil Collins in Cadbury Gorilla or the moody twang of Heard it Through the Grapevine for Levi’s. That’s why we’ve teamed up with Syncbubble to launch a unique musical experiment to shed some light on the power of music in advertising.

Over the coming weeks and months we’ll be challenging the likes of Danny Kleinman, Chris Palmer, Kai-Lu Hsiung, Dave Trott, Sean Thompson, James Studholme and more to refresh classic ads with a musical makeover. Using Syncbubble technology, they’ll be finding new tracks for old favourites. Will they be able to improve on perfection, or will their choices completely transform the mood and message of well-known commercials?

Today we’re kicking off with BBH London Deputy ECD Rosie Arnold, who is taking on Sony Balls – the spot that rocketed José Gonzalez to the top of the charts – and Havas Worldwide Creative Chairman Gerry Moira, who will be redressing the beautiful Lynx spot Getting Dressed. Find out how they got on and how the experiment made them re-think these iconic ads.

Gerry Moira on Lynx ‘Getting Dressed’

Check out the original below.

“Everyone knows the transformative power of music. You could put a decent track on a Gillette ad and… well maybe not. But dropping great ‘choons’ over formulaic ads is no fun. So I decided to challenge one of the greatest music selections of all time. Lynx 'Getting Dressed’ is one of my favourite spots. This spontaneous coming together of equals in guilt-free, inconsequential sex is the path the brand could have taken were it not too intimidating and difficult for a target market of insecure adolescents. Instead we've had a series of well-made wank-fests featuring model on geek action. Now, I like a wank-fest as much as the next man and a lot of that BBH product was funny and inventive but nothing since has come close to the raw understated erotic power of Getting Dressed. The direction, the casting, all flawless – but the whopping great cherry on the top was the track. Israel Kamakawiwo'ole's version of Somewhere Over the Rainbow owed more to the emotionally devastating Eva Cassidy arrangement than Judy Garland's mega-hit, but it struck the perfect note. Essentially it is a sad song about optimism. A song about 'better tomorrows' delivered in a poignant, wrist-slashing style. (This irony is of course magnified by the untimely deaths of all who had hits with it.) Contrast then this bittersweet musical message with the careless insouciance of our two young lovers, perfect!

“I can't improve on that dynamic. For me it's why the ad works so well. I've chosen Maria Callas singing 'Un bel di, vedremo' from Madame Butterfly. This is also a song about good times ahead but delivered with such heart-eviscerating emotion that you just know everyone's fucked. There's a scratchiness to the old recording that brings a third person weirdness to the picture which I like. I wish I could have chosen something radically different like Slipknot or some hard-bangin' house but you don't mess with perfection.”

Check out the original below.

“I love ‘The Good The Bad and The Ugly’. It's a track I have tried on quite a few ads in the past but it’s never quite worked. It is haunting, heroic and quirky with a bit of humour to it too – I like the Wild West tone and the feeling that something is arriving in town. This time it’s millions of coloured balls.

“It is a really hard ad to change the music on because of the pace. I first tried punk – The Clash’s White Riot and then Bat Out Of Hell by Meatloaf – just to see what happened when you did 180-degree turn. But the grace of the balls just didn't work with a faster beat. Honestly, the original, José Gonzales’ Heartbeat, is really hard to beat."

What would you do? Have a go.

So what do you think? Simon Elms of Syncbubble and Eclectic Music and LBB’s Laura Swinton got together to discuss their reactions to Rosie and Gerry’s choices and their implications for the bigger debate around the role of music in advertising.

“Someone clever once said that ‘the function of music is to relieve us of the tyranny of conscious thought’ and this is particularly true of the function of the Lynx music,” believes Simon. “As Gerry describes so well, the juxtaposition of a very sad piece of music over images of a shag fest are a seemingly odd choice, and yet are the essence of the success of the ad. I think he mimics that formula well with the Maria Callas piece. The fact that it's old [and sounds it] also really adds something. There’s something particularly powerful about mixing up old sounds with contemporary images or conversely ancient movies with futuristic tracks. I have seen an old Charlie Chaplin film dubbed with Drum and Bass that works incredibly well.”

And Laura too is impressed by Gerry’s ‘fine-tuning’. “When you head to foreign climes, there’s a phrase used by purveyors of knock-off Rolexes and handbags that fits perfectly here: ‘same same... but different’. By focusing on the emotional impact of the music rather than genre or instrumentation, Gerry has created a loving tribute that recreates the mood of one of his favourite ads while adding something intangibly new. In the years since Getting Dressed launched, an infestation of ukulele-backed ads have become a whole new sub-genre of twee-vertising. I wonder if the emotion of the original track – so fresh and pure at the time – has become diluted over the years because of this? By opting for unexpected opera and the inimitable Maria Callas I think Gerry has restored the ad’s ‘gut- punch’.”

While Gerry was on a mission to create a tribute to his favourite ad and recreate it’s emotion, Rosie’s choice has completely transformed the whole spirit and tone of Sony Balls.

“Rosie’s choice is heroic and dramatizes the cascading balls whereas before they were described by the music as something magical, peaceful and beautiful,” muses Simon. “This is less subtle than the original and makes up the viewer’s mind for them but is no less effective in its message.”

What Rosie’s choice also shows is that music always brings its own context and history to an ad. “On one hand, Rosie has cleverly switched Balls from meditative to menacing. However I think there might be more to it than that too,” says Laura. “She also raises an interesting question about whether a piece of music can be transformed by the ad that it’s used in. Just think about how Cadbury Gorilla more or less rehabilitated Phil Collins! In this case it’s hard for me to put my finger on whether the threatening overtones of the track are purely related to the composition or if it’s my memories of The Good, The Bad and The Ugly film that are colouring my impression.”

And Simon too can’t quite shake his memories of Clint Eastwood in a poncho either. “I love this music. It’s a total classic. Great musicianship - I even like the Jimmy Savile-esque backing vocals, but for me it has such associations with a particular brutal film genre that I would find it hard to use in anything other than comic situations. But actually is it wrong? It has a great sense of space and a great build. Lots of things are perfect but the association, again for me, is a sinister one. Does that matter? For my generation I think that it does matter but for a whole new generation I'm sure it could be perfect. Remember the track 'Golden Brown' [euphemism for heroin] was used on a Golden Syrup ad and… it always made me snigger but it worked beautifully.”

Both Rosie and Gerry’s choices were completely unexpected for Simon – and show just how subjective music can be. “People always use music as the ultimate proof that 'beauty is in the eye of the beholder' or the best illustration of how tastes in 'the arts' are subjective and that there are no wrong answers. Just in the handful of people who have seen these redubs we have seen polar differences of opinion about their merits or the lack of them. Try being me – a composer of music for film who's task it is on a daily basis to moderate this madness of 'there are no wrong answers!',” laughs Simon.

The experiments have also reinforced the power and influence that music has in advertising. “First and foremost, the new versions show us how there are no rules. Even where iconic ads and their music tracks have entered the psyche, music can knock down walls. The power of music in advertising is such that we can tolerate looking at the known and perhaps even loved and look at these things afresh with an open mind,” says Simon.

He continues: “With foresight, and where the track forms an integral part of the idea itself, then I would say that the value of the role of music in advertising is almost immeasurable. However, editors and producers will all tell you that the moment they know their worst fears are being realised and that everyone has a turkey on their hands is when someone in the room says 'you, know what? I think it needs music'. The value of music here in papering over cracks is clearly less but still has a role to play. The real joy is when everyone is just trying to make the ad as good as it possibly can be. And you write something or find something that makes the hairs on the back of your neck stand up. It makes you feel like Lynford Christie, Barcelona 1992.”

In the coming months, LBB and Syncbubble will be teaming up with more industry legends to tinker with more iconic ads. According to Simon it’s going to take some brave souls to take on the challenge and he’s hoping to see big things. “Hopefully we’ll have a real forensic and insightful discussion into the function and beauty of music.”