Inspired by last week’s makeover from John Smith and Stephen Hopkins, here are our alternative picks for the PlayStation 2 campaign

It was possibly one of the most challenging Syncbubble Dubbles tasks to date. The award winning ad’s original track was the quirky and delightfully obscure Shirley Temple song ‘De Gospel Train’ and you have to be some kind of monster to shove the original Annie off a mountain. John and Stephen came good with a selection of alternative tracks, like the Requiem for a Dream theme and the Jam’s ‘Going Underground’ that completely transformed the whole mood of the film.

So what happened when the Syncbubble team got their mitts on ‘Mountain’? Could they do any better? Find out below. And in the meantime if you fancy yourself as a bit of music supervisor-in-the-making why not have a go yourself at syncbubble.com/syncbubble-dubbles?

“We had quite a big response this week but all of the good choices were very much in the same vein as the original Shirley Temple track, which goes to show how good the original was,” says Syncbubble’s Peter Corway. “I personally thought John Smith’s ‘Bugsy Malone’ track had already gone down that road and executed it incredibly well, so this week we are focusing just on our Staff Picks.” 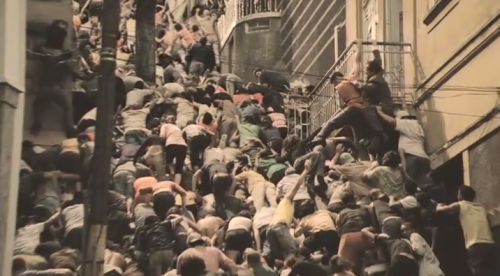 Listen to the tracks here.

First up is Cristobal Tapia de Veer, who we’re big fans of. Utopia was a game-changer for television in many ways but Cristobal’s score was truly captivating.

We have chosen the last track on the Utopia series 1 soundtrack 'Finale', which we feel has the right amount of jolly, playful menace.

Next up is Climb Every Mountain, a track which offers this great hope of heroism and optimism against a backdrop of competitive hedonism and downright anarchy.

And finally we have the rebellious and fun fuelled 'Psycho' by Goldblade, a punk track that flows alongside the images of people crowd surfing and ‘stage’ diving from the mountain.