SXSW Day 5: How Brands Should Get Political, The End of Content and Flying Ubers 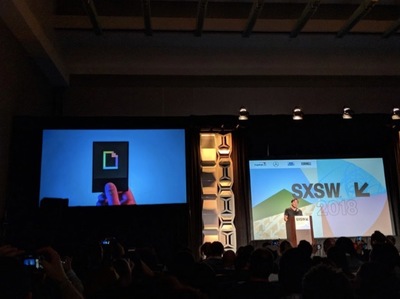 Rather doom and gloom (read: clickbait) title, but Founder and CEO of GIPHY Alex Chung had a serious case to make. After strolling out to the podium and taking a photo of the audience with a retro-looking camera, Alex Chung boldly stated that "text is a bad compression format". It simply takes too long to type out exactly how we're feeling or communicate an emotion. Text lets you share a description, but a GIF shares an expression.

The average person is absorbing over 18 hours of content a day, so there's just not enough space. We're in a Content Real Estate Crisis. Companies like Netflix or other big players with bottomless budgets can afford to position their content during prime-time, but us? We've gotta get creative and fill in the cracks.

Whether it's micro-content (<6-seconds), new content displaying or sharing methods (AR, VR, Stories Platforms, Stickers, etc) or, y'know, by being Netflix and just throwing money at it - it's a matter of finding a way to be entertaining.

At the end of his session, Chung revealed that the retro-looking camera he used at the start was actually a prototype of his: A GIPHY Camera. He wanted to see if we could capture more emotion in the real world by taking snapshots of emotive moments. He also revealed the GIPHY Frame: a 2mm-thick digital screen that looks like a polaroid but plays gifs. Chung has essentially created a juiced-up Polaroid camera. Unfortunately, these products will be released "maybe never, I don't know".

In summary: There's no space left for content. We either need to be small enough to fit in the cracks, find alternative space-saving methods or have enough money to just buy your own space.

And give us the GIPHY Camera, Chung - you tease!

Why engaging with politics is critical for brands

To say the US political environment is "highly-charged" is a bit of an understatement. Which is why Latia Curry created Rally: a company that works with brands and agencies to navigate touchy political subjects when rolling out purpose-driven messaging. She showcased several high-profile US brands that have taken a stance and categorised them in three main stages.

Level 1. Testing the Waters
Brands like Burger King have produced videos across several issues like Net Neutrality and Cyber Bullying. Latia commended them for this effort but encouraged them to determine which issues they want to stand behind and really dial in and try to make a real-world change.

Level 2. Owning your Position
Last year, Lyft pledged to donate a million dollars to the ACLU as a result of President Trump's immigration orders on seven majority-Muslim countries. This gesture showcased that Lyft had moved beyond messaging towards more serious commitments.

Level 3. Walking the Walk
Interestingly, the brand Latia showcased on this level was ultra-conservative US brand Chick-Fil-A. While she didn't agree with the views of Chick-Fil-A, she said they were one of the best examples of a brand's political beliefs filtering through their entire organization; from being closed on Sunday for church services, to open stances against same-sex marriage.

With Chick-Fil-A you know what you are getting as a consumer, beyond the food. The scary part is they are one of the fastest growing QSR chains in America.

Overall, it is becoming increasingly important for brands to determine their position on the political spectrum. Not only that, but you must make sure your efforts are authentic and consistent, or you'll be doing more damage than good - to your brand and importantly, the communities you're trying to help.

There's so much going on here that missing out on a few sessions is a given. But this means you'll accidentally stumble into something else. Today, a drop-in ended up being a winner.

Carroll talked about a key flaw in the way Design Thinking is often understood. We can't observe a problem, then leave to create the solution, but instead, we should create, build and test solutions in the community. People understand the problems better than we can observe them. As problem solvers, we should be helping people realise their solutions rather than trying to do it for them.

The unrest in Ferguson in 2014 drove Carroll to launch the Creation Reaction Lab - a think-tank approach to building equitable communities. In just 24 hours, the first lab resulted in 5 projects ranging from public art to educational problems. A perfect example of community helping community.

Because, to be blunt, who are we to say what's best for others?

With a job title like Director of Engineering for Aviation at Uber, Mark Moore's talk was always going to be intriguing. He was joined by Antonio Campello, CEO of Aviation at Embraer X to talk about Vertical Take-off and Landing aircrafts (VTOLs).

As a catchy hype video outlined at the beginning of the session, the project the two companies are collaborating on is extremely ambitious - UberAIR: a fleet of electric autonomous vehicles that will alleviate metropolitan traffic.

The helicopter-like shuttles will be booked via the Uber App we all know and love, and launch from SkyPorts around the city. They'll also be roomy enough to be shared with other passengers travelling to the same area - making the entire process more economical.

The vision is everything you'd expect - ambitious, high tech and something out of science fiction. But the craziest part of this whole thing is it's a lot closer that you'd think. Uber is actively working on overcoming the barriers to make VTOLs a reality in every city and is bringing UberAIR to Dallas and Los Angeles by 2020.

With that launch date they will only just eek out Kitty Hawk--the company led by Sebastian Thrun and backed by Google co-founder Larry Page--who only today announced they aim to launch their fleet of VTOLs in New Zealand by 2021.

So, not only will we have flying cars, but we won't even have to download a new app. Just when you thought Uber couldn't get more convenient.