SXSW: Beam Me Up Scotty!

Why VCCP Innovation Lead, Will Harvey, thinks we need real debate about the social realities of artificial intelligence 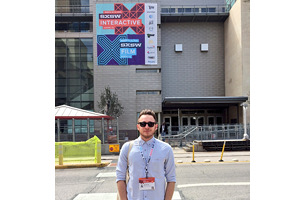 Let's talk artificial intelligence (AI). We continue to see leaps and bounds in the digital health space, with advancements in technology such as 3D-printed limbs, and micro-computer pills. We are moving closer and closer towards a blend of our physical and digital bodies. I attended a keynote speech that was both inspirational, and a little scary, as it discussed the advances that we might soon make in this field.

Martine Rothblatt is the CEO of United Therapeutics, author of Virtually Human, and one of the highest paid female CEOs in the US. She is also transgender.

In this session, she spoke about her life, and of her radically innovative work. One of the leading subjects in the talk that really inspired me was the debate surrounding cyber consciousness, or AI; specifically, the ability of a machine to think and feel like a human being. This may sound like science fiction - a scene from 2001: A Space Odyssey or Her - but it is very real, and it is very near.

I have written a piece before about quantum computing that looks at the use of super computers to solve massive problems - but this takes it to the next level.

Martine spoke about the concept of uploading our consciousness as a ‘mind file’ that embodies everything we are - from our mannerisms and personalities to our attitudes, beliefs and memories. These mind files could then exist as a digital clone that could, in theory, live forever – or at least far longer your biological self!

As I said, it sounds like science fiction but Martine has already created a prototype of this – she captured a mind file of her wife a few years ago. The clone is capable of having conversations, debates and was even interviewed by New York magazine last year. It still has a long way to go before being at the level of HAL, with seamless response and complete cyber consciousness, but they are making enormous leaps and bounds in this field.

As we move towards the reality of AI, a number of serious debates need to take place regarding the social impact and legal rights of these digital entities. We live in a time in which we increasingly capture our daily lives on social networks - from photos to interests and opinions - so is it really that far removed from a mind file?

If you can, I would advise watching the talk once it is uploaded on the SXSW site – it really was a session that made me think!

Will Harvey is Innovation Lead at VCCP