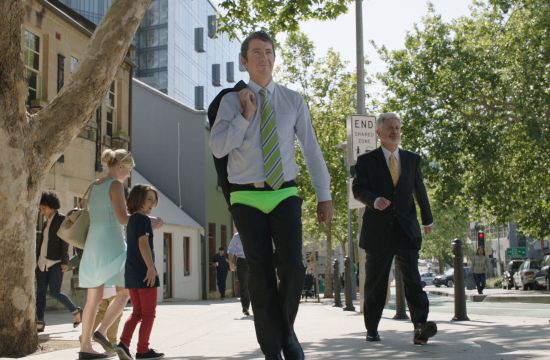 EnergyAustralia with Swim Australia is challenging Aussies to become WaterHEROES in a new campaign aimed at raising awareness of water safety and stopping the growing number of drowning deaths.

The campaign coincides with SwimSAFER Week (25 November – 1 December), a new initiative by EnergyAustralia and Swim Australia to raise awareness and help educate all Australians about water safety.

Drowning deaths in children under the age of five increased 48 per cent last year, while the number of fatalities rose five per cent to 291.

Created by The Works, the WaterHERO campaign encourages Australians to visit www.waterhero.com.au to test their water safety knowledge. If they pass the test they are encouraged to wear their boardies, budgies or bikinis over their clothes as a demonstration of support.

An online video features a suited businessman wearing a pair of bright green speedos to the admiration of passersby. The VO says: “You can tell a WaterHERO when you see one.”

The Works developed the online test in conjunction with EnergyAustralia and Swim Australia as well as creating the WaterHERO website and online banners, strip ads and posters.

The campaign is being amplified through PR, working with partners Network 10, News Corp and Fairfax Radio to secure editorial coverage.

More than 300 swim schools across Australia will participate in EnergyAustralia SwimSAFER Week, with children and their families learning water skills and the elements of an emergency action plan including CPR.

Simon Brady, Head of Product and Brand Marketing at EnergyAustralia said: “Water safety is a serious issue but we wanted a device that would get Australians talking as well as encouraging them to see just how water aware they are. WaterHERO will drive participation in a fun and engaging way. “

Damian Pincus, creative partner at The Works said: “Superheros have hero status for doing amazing things and we wanted to reward people for making the effort to educate themselves on water safety.”

The Works was handed below-the-line duties for EnergyAustralia in July this year following a pitch.