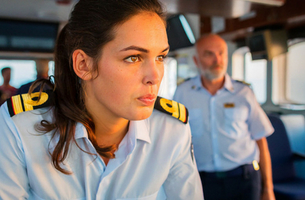 Her company decided to sit her down to ask her a few questions from behind the scenes of the shoot.

Read below to discover how she found her female mariner lead, the challenges of shooting in water and how she conceived the visual concept for this piece.

Q> What first struck you about this script when you read it?
Kathi Prosser> I loved the idea of working with women who work at sea. They are few and far between, and, with the exception of the navy, they are typically the sole female on board. I had the pleasure of meeting and Skype interviewing female captains, engineers and first mates from Kiev to Egypt to France to Holland.

Q> Did you cast real women? How did you find your female mariner?
KP> We searched through social media, ultimately sourcing @girlsatsea on Instagram, coincidentally launched by Lonne, who would be our lead. I wanted the film to be absolutely authentic and to capture the tensions that come with being a lone female on a ship for months at a time. While I interviewed other contenders, Lonne was at sea so she self-videoed a day of her life at work. More often than not, I have to find actresses to play a woman like this, but here I had the real deal – vivacious and engaging, and an incredible role model.

On these long-haul routes from Amsterdam and Portugal, past the Ivory Coast and through to Brazil, Lonne has been trained to be on alert – to avoid dangerous situations and what to do in the event of a pirate attack. As such, she was incredibly suspicious when we approached her. This wasn’t paranoia, this was ‘sea smart’ resourcefulness. Right up until we picked her up at the airport, she still thought it could be a hoax. Lonne, in fact, Googled and Facebooked every name from every email she received to see that we were legitimate.

Q> What was your thinking with shooting and the visual style?
KP>The available light was a huge factor. At sea, you can’t turn a tanker around on a whim to get the light to shine in the right direction, so we sailed out and planned shots on one side of the ship, then we sailed back and shot in the other direction. We did our interior shooting in the middle of the day when the sun was at its highest. I really wanted to shoot the sleeping quarters for real, but sadly it just wasn’t possible. Since Lonne is the only woman on the ship, her quarters are private and like a closet and impossible to shoot in.

I brought one of my favourite DPs on the shoot, Adam Marsden who has done a lot of this type of work (action filled and raw), so I could capture the strength and boldness of the job that Lonne does.

Q> There must have been some challenges shooting on a working ship?

KP> Shooting on a ship was the toughest part of all and it didn’t get any easier once we were there. These ships are working ships and out of port for months at a time. The only time they are in port is for maintenance – so it’s tough to pinpoint dates.We looked at major shipping ports from Uruguay to Ukraine to Europe and the UK, ultimately settling on Athens.

Once we were there, the port would not guarantee which ship we would be shooting on, or even allow us on for a scout – production or how our business works was the last thing on their minds – and why wouldn’t it be? But we had a real shipping officer and required a real ship, so we danced the dance. It was particularly hard on my producer Justin, who was responding to last minute changes, demands and an unsigned location contract right up until the night before shooting. We let loose a few nights just to relieve the pressure– and what nights they were!

Q> What do you think you learnt on the shoot, and what of this have you taken with you to other jobs?
KP> I learnt to be aggressive on the day and to seize the moment. I had a picture in my head of what I wanted, but we had to really think on our feet.

As I said, these are working ships they’re not waiting for you to shoot on them. I’ve been getting more forceful in all my work, making sure there’s that window to finding the moment, instead of planning everything so tightly that there’s no flexibility on the day. This has really driven me to find these moments in all the spots I’m working on.