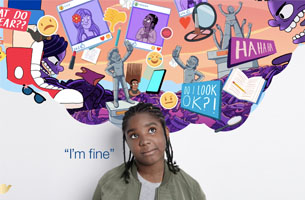 Combining animation and musical performances to delve into the perceptions of girls around the world who battle with self-esteem, Andrew Lang’s new quartet of films for Dove and Ogilvy UK explore the hopes, dreams, frustrations and doubts of girls like Karla from Mexico City.
Dove is looking to critique the meaning of ‘I’m fine’ – a phrase usually snapped by insecure teenagers – in an animated series of films celebrating its ongoing partnership with Cartoon Network.
The Unilever brand announced a partnership with Cartoon Network’s Steven Universe series in April this year. Working alongside the show's animators and writer, Rebecca Sugar, Dove creates original shorts for broadcast using the show's characters to help educate kids and build body confidence. The animation has been produced in partnership with Picasso Pictures.
The ‘I’m Fine’ campaign has been crafted by Ogilvy to draw attention to the project, using the same medium of cartoons to explore the insecurities felt by four girls in the USA, Brazil, Mexico and France.
The films begin a live action sequence of the teenagers interacting with their family at home before they’re asked how their day has been. Animation then floods the screen and the girls are transformed into avatars of themselves, in a landscape where their hopes and fears are visualised as animated metaphors.
The girls rap their inner thoughts over each cartoon in their local language. Nesida in New York voices her thoughts on everything from her hairstyle to the inherent narcissism of the selfie, for instance.
As the spoken word and animation speed to reach a climax of frustration, live action takes over. The girls reply with a simple phrase: “It was fine.”
Watch more of Andrew Lang’s work at thesweetshop.tv.
view more - Creative