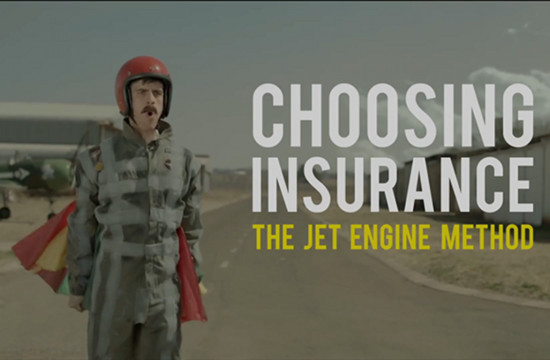 How do you tell a great, entertaining story in 20 seconds?

This is the question Sweet Spot Content formulated the answer to in their latest production for hippo.co.za. Rather than producing a longer version together with a cut-down, they took up the challenge of getting the message across effectively in just 20 seconds. As a highly experienced team, they had the necessary understanding of using time optimally and the creative discipline to pull it off.

The insight that inspired the campaign, devised by agency MetropolitanRepublic, was simple: if you don’t compare insurance quotes with hippo.co.za, so that you can find the one that’s best for you, you’re choosing insurance irrationally. The agency arrived at a simple method of dramatising this message – by telling stories about the most irrational ways anyone could choose insurance.

So to begin answering the bigger question – how to achieve this in just 20 seconds per spot – co-director and cinematographer, Miles Goodall says the story is everything and has to be good and single-minded.

And that’s where the fun began. Sweet Spot Content and MetropolitanRepublic collaborated to develop the stories about the most outrageous ways to choose insurance. It was a very productive exercise, and yielded five executions crafted specifically to play out in 20 seconds – building on the same cheeky humour that Hippo.co.za is known for.

MetropolitanRepublic’s Michael Vines (copywriter) and Coenraad Grebe (art director) talk about the alliance, “Sweet Spot is very open to genuine collaboration, which is refreshing. From the conceptual beginnings of the TV campaign (in which they were very involved) all the way through to post, Linda, Miles and Gareth never wavered in their attention to detail and utter commitment to producing the best films possible. They were cognisant of our client's needs and managed to consistently surprise us with their ideas and solutions.”

The first outrageous choosing technique to hit TV sets across the country is the Jet Engine method. All you need is a wall with your options marked out on it, a jet engine and a Velcro-covered boiler suit. Or simply use the Hippo instead.

A key part of this commercial’s success, and of the production as a whole, lay in the planning. When you’ve got very little time to tell the tale, you need to make it count by getting the details right.

Sweet Spot Content put this approach into practice in many ways, most notably in their production design. Says co-director and production designer Gareth Paul, “A lot of detail in things like the art direction helps to tell the stories in 20 seconds, because it immediately let’s the viewer know where they are intuitively, it supports the characters – and it can also add to the humour.”

The shot list was also key, with a detailed and disciplined shooting plan becoming a part of the process as far back as in the initial treatment. That meant carefully working out and thinking through every single shot well in advance.

But possibly the most important detail to pay attention to was the casting. A rigorous and wide-ranging search yielded comical characters whose looks add to the stories and were naturally suited to their roles.

This thorough and uncompromising approach is made possible by Sweet Spot’s unique formula. With the experienced Linda Notelovitz in charge of the production, Miles a DOP and director of longstanding repute and Gareth with a dual background in film and on agency side, they create a powerful and energetic unit. With an instinctive understanding of each other’s roles, dividing and conquering is effortless, and all bases are always covered.

This was underlined by Michael and Coenraad, “The Sweet Spot team went the extra mile in every aspect of the production – from wardrobe, through to art direction and even the locations. In Miles and Gareth we found a directing team that is not only creative, but possesses an enviable attention to detail – and their care and attention is obvious in the finished ads.”

The Jet Engine Method also received Brendan Seery’s marketing and media orchid in the latest edition of the Saturday Star.