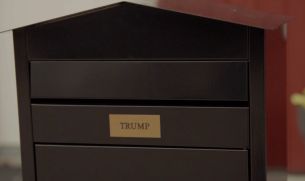 It’s 30 feet tall and the neighbours are supposed to pay for it, but it’s not the wall you think it is, in Swedish hardware store K-rauta’s latest social media stunt. The Trump looking for help is actually Karolin Trump who’s building her own wall in a suburb of Stockholm, Sweden. And by the end of the day, she realises that it’s a pretty bad idea.

K-rauta Sweden builds a wall with Trump from TBWA\Stockholm on Vimeo.

”No construction project is more in the news right now than the Trump wall, so we thought it was a relevant context to tap into and a great way of talking about K-rauta’s range of bricks and helpful staff,” says Louise Sallander PR-strategist at TBWA Stockholm, the ad agency behind the film. She continues: ”Early April is the month when you start tending to your garden – and the deadline for the contractors for the real wall – so the timing couldn’t be better”.
The ad was released on social media on Wednesday and is part of K-rauta’s and TBWA Stockholm’s “always on”-strategy that is currently taking shape. It spearheads the store’s big spring campaign for bricks, tools and services concerning the garden.