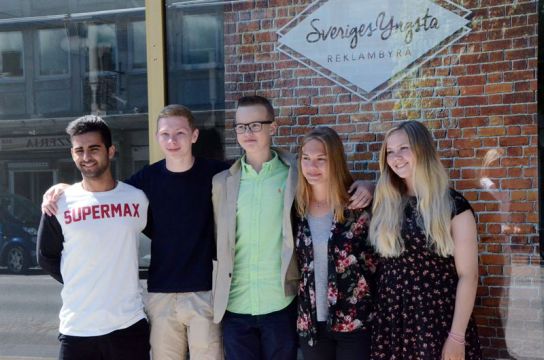 An agency consisting of only 15–19-year olds whose mission is to make advertising that will attract other young people: That’s the idea behind Sweden’s youngest advertising agency – an initiative from Kunskapsförbundet and Cordovan Communication. The Agency's mission is to promote three upper secondary schools.
"We asked ourselves: who communicates best with young people aged 15–16 years? The answer, we realized, is of course the young people themselves. Therefore, we have started Sweden’s youngest advertising agency. These young people’s challenge will be to reach through today’s media noise and market our schools to young people. In other words, their job will be to create both ads and commercials as well as material for social media and open house events." says Linda Blom, Head of Communications at Kunskapsförbundet.
"For me, working with art and design is really a dream come true. Working at Sweden’s youngest advertising agency is the perfect step towards such a career. Despite my young age, I have some experience of working life and think I can add greatly to Sweden’s youngest advertising agency. I already have a lot of ideas that I want to share." says Markus Petterson, 17.
Meet the team below:
Emma Häll Henriksson, age 19 – Attends her second year of the arts program and operates both a blog and her own podcast. She has, in other words, worked a lot with both text, picture and editing.
Markus Pettersson, age 17 – Describes himself as a future head of design at Apple. He impressed Kunskapsförbundet as he created his own web site when applying for the job at Sweden's youngest agency.
Karim Fakih, age 19 – Devotes his spare time to working with both film and photography. Among other things, he works for a film crew as director, creative director and marketer. Via Sweden's youngest advertising agency he wants to meet other creative people, develop his skills and get to know the advertising industry, where he wants to work in the future.
Johan Gunnarsson, age 15 – Loves to express himself creatively. He plays the piano, takes drama lessons, and likes photography/film making. His main interest is to draw/paint, both by hand and using Photoshop/Illustrator. He has started ZantosDesign where he shows his artwork and also sells his designs as prints on various products.
Maja Meuller, age 17 – Likes to express her creative side in the form of photos, media, music, writing, painting, baking and cooking. She sees Sweden’s youngest advertising agency as an opportunity to be creative and, at the same time, help and reach out to other young people.
view more - Creative