Swarovski Looks 120 Years into the Future with Studio Swine 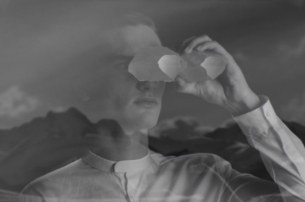 When luxury crystal manufacturer Swarovski celebrated its 120th anniversary last year, they turned to design collective Studio Swine to help them look 120 years into the future.

Studio Swine (architect Azusa Murakami and artist Alexander Groves) won Swarovski’s Young Designer of the Year Award and were commissioned to develop something that would mark the brand’s big anniversary.

Dune Clock and Dune Table were created using millions of tiny, precision-cut crystals that are smaller than a grain of sand. The clock functions as a futuristic hourglass, telling time with the falling crystals and digital numbers. With the table, sound frequencies cause the crystals to form shifting landscapes.

The team’s ethos is to create objects with a story behind them and their design projects are usually accompanied by film – and this project was no different. They worked with RSA director and long-time collaborator Juriaan Booij and London-based post production company Unit to develop Terraforming, the story of a futuristic cartographer exploring a crystal planet.

The film feels like a chic interpretation of a 1950s sci-fi B-movie and that link is an intentional nod to Swarovski’s history in Tinsel Town. “We didn’t know they have such a heritage in Hollywood, but they’ve done so much. They created Dorothy’s ruby slippers!” marvels Alexander Groves.

Dune Table and Dune Clock were revealed in the summer of 2015 along with an early cut of the film, but over the past few months Juriaan and the team at Unit have been tweaking the 3D elements of the film and refining the edit before it was released online.

This project marks the team’s first venture into fiction – previous ventures include a chair built out of sea debris and constructed aboard a working fishing boat and a documentary about the hair trade in China that followed the creation of decorative objects made of hair and resin. But that’s not to say that this imaginative science fiction project didn’t involve a significant amount of research.

“Every time we do a project we do intensive research. So for this one, we joined the British Interplanetary Society,” says Azusa. Azusa and Alexander also went to meet and work with a master flint napper in Sussex (‘a professional caveman’) to research one of the film’s scenes.

For Juriaan, the collaborations with Studio Swine are a chance to flex his own creative muscles. “There’s a lot of freedom,” he says. “I can basically tell a story how I want to so it’s very different to a commercial project. I film and edit it myself, so there’s a big signature there. I obviously learn a lot.”

Studio Swine’s projects mark the centre of a Venn diagram that brings together product design, storytelling, film and art direction. And this latest for Swarovksi adds branded content to the mix. Studio Swine are particularly interested in ethical or eco brands – in this case Swarovksi could be seen as an ethical alternative to blood diamonds.

Their projects have been popular with both the design community (The Hair Road artifacts have been displayed at the Victoria & Albert Museum in London and design expos in Holland and Shanghai) and online fans, who have organically flocked to their films.

GS
view more - Behind the Work