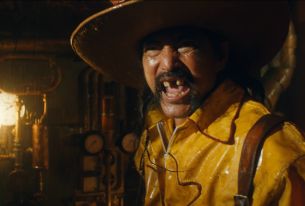 To celebrate Spring, Hornbach and Heimat have launched a campaign to mark the start of the home improvement season. ‘Sweat it out’ takes a somewhat surrealist look at the rejuvenating effects of heavy physical labour in the home and garden. In marked contrast stylistically to Hornbach's previous campaign of this year, Werkstück Edition 001, ‘Sweat it out’ pushes a fantastical, imaginative style to the max, putting everyday stressful situations into a completely new light.

Troubles at work, problems with the kids and over-the-top media consumption are literally sweat out by a single act of DIY. In the TV commercial, the task of coping with nerve-racking, everyday problems is taken over by a troupe of hyperactive ‘rubber cowboys’ who represent visually what’s going on inside the human body on a cellular level when sweat is being produced during hard work. These ‘rubber cowboys’ have one, sole, raison d’ être - and that is to get rid of everyday problems and stresses by literally transforming them into sweat. With a “bye-bye”, they bid farewell to the sweat - and also all of those day-to-day problems - which are then pushed out into the real world of the protagonist, who is engaged in the strenuous, but ultimately rewarding task of moving huge slabs of rock to build natural stone steps in his garden.

The spot was made together with agency HEIMAT and director Andreas Nilsson through CZAR, and is characterised by its highly stylised, bombastic art direction and keen attention to detail - which is more reminiscent of a movie than a TV commercial.

“We quickly saw potential in the ‘rubber cowboys’, which were developed in collaboration with director Andreas Nilsson and production designer Peter Grant,” says Guido Heffels, creative head at HEIMAT and responsible for the campaign. “We immediately got to work on developing a story for our own ‘rubber cowboy’ format.”

“The campaign is a typical Hornbach invitation to be both active and creative outside in your garden during this spring,” explains Thomas Schnaitmann, Head of Marketing in Germany and International Marketing Communication for Hornbach. “Anyone who has ever dug out a garden pond, planted a flower bed or built a patio knows that a project which makes you sweat is the perfect way get rid of stress that has built up over the day.”

‘Sweat it out’ is an integrated campaign for TV, online, social media, outdoor, radio, display and point of sale.