Directors will work on US general market productions for global brands 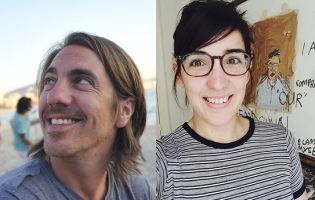 Superseed, the bi-coastal commercial production house led by EP Pola Brown, has signed Alauda Ruiz de Azúa and Felipe Gomez Aparicio, award winning international directors of commercials and film. Alauda works out of Madrid and Felipe is based in Madrid and Buenos Aires. Both directors professionally go by their first names only. They work in English and Spanish, and have directed Spanish language commercials in the US. They will be collaborating with Superseed on US general market productions for global brands.

“Alauda and Felipe have an awesome body of work," said Brown. “Alauda’s speciality is creating slice of life vignettes, authentic performances and poetic images, her films provoke genuine emotion. Felipe is a narrative artist and consummate director of actors, who also focuses on art direction as a way to add dimension to the characters and the stories. By joining Superseed, they not only deepen our bench, they make it possible for us to offer a truly artistic and global attitude to spot making. I’m thrilled to be working with them.”

Felipe studied at Centro de Investigación Cinematográfica. After working several years as an assistant director, he started directing commercials in 2006 and won a Bronze Lion in 2008 for the Pepsico spot 'Kisses' and a Silver Lion for his 'Duets' campaign for Brewery and Malting Quilmes. Other standout campaigns include work on Mercedes Benz in Brazil, as well as Volkswagen and Renault in Argentina. For VIVO he helmed a spot starring Brazilian football star Pelé. He also shot a Banco Francés campaign which won a Gold mention in 'Financial Services' at the Effie Awards.

Felipe directed 'The Story of Lucy', a 3-minute short film with agency Energy BBDO Chicago for the SC Johnson brand Windex. It was Ad of the Day in Adweek and shortlisted at the Clios. Felipe’s recent work is a series of shortfilms for Renault (Publicis Graffiti) that he shot in Argentina and Chile. He works regularly for Del Campo, Brazil Almap BBDO, BBDO Argentina, Sra. Rushmore Madrid, F / Nazca, Brazil, Argentina JWT, DDB Sao Paulo, Argentina, Publicis Lisbon, Publicis Graffiti, BBH Sao Paulo. You can see his work here.

“I work on projects that are first and foremost driven by a creative search,” said Felipe. “My goal is always to achieve a harmonious process, simply because that always achieves the best results. We still have to believe in the magic of filming, of recognising the story and thinking how to improve it, and how to tell it in another way. With Superseed I will continue to pursue that creative search. I am looking forward to working with this new team.”

A graduate of the ECAM (Madrid Cinema School), Alauda first worked as an assistant director and script supervisor. She wrote and directed two short films: 'Clases Particulares' (Private Lessons, 2005) and 'Dicen' (They Say, 2011), which combined have collected more than 100 national and international awards.  She began her commercial career as a director in 2007. She has directed spots for brands such as Toyota, Coca-Cola, Samsung, Once, Mapfre, BBVA, AXA, JCPenney, McDonalds, Orange. Her last short film, 'Nena' (Nena, 2011) has been screened at the Austin Film Festival. She is represented in Canada by Sparks Productions. You can see her work here.

“One of the things that I love about advertising is that every project is different and you have to be flexible with the way you approach each project every time,” said Alauda. “Pola and Superseed have a really good vibe. I love Pola’s energy and her vision of the market. I look forward to working with her and Superseed and helping bring a global perspective to world brands.”