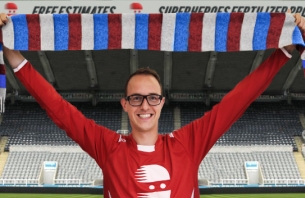 International creative agency SuperHeroes has signed creative director Niek Eijsbouts to take a key role at the agency’s Amsterdam hideout. With this pivotal new hire, the agency, based in Amsterdam and New York, takes the next step in its ambitious international growth plans.

Prior to joining SuperHeroes, Eijsbouts built a great reputation at agencies such as KesselsKramer and Belgian communications shop Happiness Brussels.

Niek Eijsbouts on his transfer: “I love independent agencies. Creativity isn’t built on annual reports. That’s also why I loved becoming part of SuperHeroes. Since their start there’s been digital creativity at heart, finger-licking executions with the right collaborations and a prosperous ground for side projects.”

In his new position at SuperHeroes, Eijsbouts will take a major role in the creative output of the agency, working for global brands such as LG, Converse, Coca-Cola and ASUS.

Rogier Vijverberg, Co-Founder and Executive Creative Director at SuperHeroes, says: “With the launch of our New York outpost, it's going to be a real asset to have a talent such as Niek onboard. Not only does he have a fantastic creative pedigree, he's also the right person to join us in our mission to save the world from boring advertising.”

Niek Eijsbouts, Creative Director at SuperHeroes, comments: “The biggest shock to overcome since I returned to Amsterdam is that suddenly people have started drinking out of used mason jars. What’s that all about?”