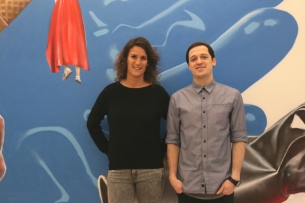 On the back of launching a new outpost in New York and creating high profile international campaigns for the likes of LG, Converse and Asus, creative agency SuperHeroes is bolstering its team with two new hires in motion graphics and strategy. The new superheroes have been given a single mission: to save the world from boring advertising.

Joining the Amsterdam hideout is Motion Graphics Designer Scott McPherson, a Canadian-born artist who has created work for brands such as Virgin Mobile, Motorola and Rockport in the past. Aside from his branded work, the hip-hop and skate culture aficionado, who designs under his alias MCPHERSO, creates bold, pop culture-inspired work for musicians and is working towards an art show of 3D illustrations.

Scott McPherson, Motion Graphics Designer, SuperHeroes, commented: “SuperHeroes has a reputation for harnessing a cool mix of high quality, humour and fun, both in the work they do and the culture of the agency itself. I’m hugely excited about being a part of this talented, international bunch of people.”

Marieke Dekker, Strategist, SuperHeroes, comments: “Apart from the cleverness that runs through every aspect of SuperHeroes’ work, the agency also has a strong innovation culture. It’s an exhilarating prospect to work as part of a team that isn’t afraid to push the creative boundaries.”

Django Weisz Blanchetta, Founder and Managing Director, SuperHeroes, adds: “With the opening of our new outpost in New York, and an ambition to expand into Asia, SuperHeroes is well on the way to establishing itself as a global, creatively ground-breaking agency. In our work we strive to make heads turn with our bold and imaginative approach to creativity and technology. These talents, with their fresh and fearless outlook, are a valuable addition to our team of superheroes.”