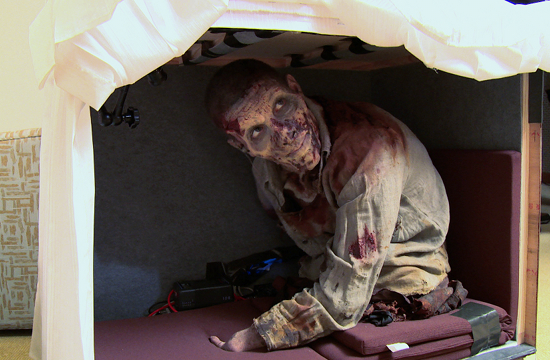 A Walking Dead superfan plays the ultimate zombie prank on an unwitting Walking Dead cast member in a new viral video to promote the show’s fourth season on FOX.

The film was devised by The Corner London and is the first instalment in the new campaign “#getFOXed”, for its client FOX International Channels (FIC). The global social media driven campaign is designed to identify superfans of FOX’ s global hit shows and celebrate them by creating unmatched fan experiences for them.

FOX is the #1 rated global entertainment channel and The Walking Dead (TWD) is their #1 rated show.

17-year-old Nick Santonastasso, who has more than 550,000 followers, was flown to Tokyo where cast members were promoting the new series, and was transformed into a walker by the show’s special effects expert, Greg Nicotero.

The actor Andrew Lincoln, who plays Rick Grimes in the show, helped Santonastasso pull off the prank on the unsuspecting Reedus, while hidden cameras captured the action from every angle.

The resulting video clocked up 3.2 million views in 48 hours.

Santonastasso, who was born with a rare condition called Hanhart syndrome and has only one arm and no legs, has become an inspiration for many disabled kids and adults. His outspoken love for TWD made him the perfect fan to launch the “#getFOXed” campaign. His prank was a follow up to his existing 2-part viral “Zombie Prank” Vine series: https://vine.co/v/hUtKn1i3FEW & https://vine.co/v/hQWjqnpwA7Z.

The Corner London and FOX worked with Santonastasso to deliver the instalments leading up to the prank and bring his dedicated followers closer to the action. Norman Reedus, FOX and other major news channels retweeted the final Vine post and film to further amplify the content to a wider audience outside of core fans and Nick’s followers.

TWD makes its global return across FOX channels outside of the US on February 10th.