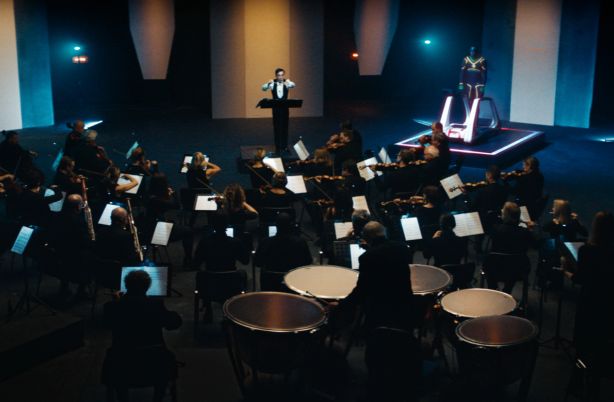 Virgin Media is today announcing the third chapter of its 'Switch to Super' campaign, which brings to life the benefits of its super broadband speeds, personified by the world’s fastest man - Usain Bolt - as SuperBolt.

The latest ad in the 'Switch to Super' series, created by BBH London, will run for 13 weeks across TV, VoD, outdoor, press and social, and is led by a new TV ad which launches on 1st January during The Great New Years Bake Off on Channel 4. The film, produced by Caviar, was directed by Jake Szymanski.

In the first chapter we saw SuperBolt select his superhero suit and in this latest execution we see the creation of SuperBolt’s theme tune.

The ad humorously dramatises what it’s like to switch to Virgin Media’s ultra-fast broadband and features SuperBolt running on a treadmill as a 50 piece orchestra begin to craft his superhero anthem.

SuperBolt is frustrated that his theme tune is not fast enough for him and he wills the musicians to play faster and faster.

The 'theme tune' story, created to evoke familiar superhero scenes, sees the interaction between SuperBolt and the conductor bring an amusing edge to the film.

Sharon Hegarty, director of brand and marketing at Virgin Media said: “Don’t let anything slow you down” was the premise on which to build the next stage of our Super Bolt brand campaign. This execution perfectly portrays the super speed and super entertainment we offer our customers.”

Adam Noel, creative director, BBH London said: “The next chapter of the Virgin Media Superbolt campaign allowed us to better define the tone. We played with Bolt’s self awareness, and introduced an unexpected character to Superbolt’s myth-creation. The result was a story that’s just as beautiful as it is absurd... at least that’s what we were going for.”